Update Required To play the media you will need to either update your browser to a recent version or update your Flash plugin.
By Hai Do
09 August, 2017


The threat of a nuclear conflict between the United States and North Korea affected an event marking the anniversary of world's second atomic attack.

A crowd gathered in the Japanese city of Nagasaki Wednesday to remember the U.S. atomic bombing there in the final days of World War II.

The attack took place on August 9, 1945. Three days earlier, U.S. forces had dropped an atomic bomb on the Japanese city of Hiroshima.

The mayor of Nagasaki spoke at Wednesday's observance. He said "A strong sense of anxiety is spreading across the globe that in the not too distant future these weapons could actually be used again."

He and the crowd observed a moment of silence at 11:02, local time -- the exact time when the atomic bomb was dropped.

The North Korean government has threatened nuclear war with the United States in the past because of United Nations sanctions against North Korea. Those measures are meant to punish the government for its nuclear tests. 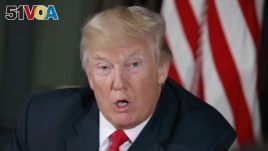 U.S. President Donald Trump warned North Korea Tuesday that its threat against the United States "will be met with fire and fury like the world has never seen."

North Korea reacted quickly to Trump's comments. The North's Korean Central News Agency said the North Korean military is examining its plan for "making an enveloping fire" around Guam. The U.S. military has bases on the island territory.

This is the first time that North Korea has identified an exact target.

Balbina Hwang teaches at Georgetown University in Washington, D.C. She said, "The increase in rhetoric does raise existing tensions, but it does not translate into a shift of U.S. policy or strategy on North Korea."

A former deputy U.S. ambassador to the UN, David Pressman, is concerned about the rising tensions. "Perhaps there wasn't a careful consideration of the words of our commander in chief in this instance," Pressman said.

He added that, "If ever there was a topic on which we need to be extremely precise, it's nuclear proliferation, when dealing with someone who is as unpredictable as Kim Jong Un."

Speaking to reporters while flying to Guam, U.S. Secretary of State Rex Tillerson said he does not believe there is a threat to the island any time soon. He added "the president is sending a strong message to North Korea in language that Kim Jong Un would understand."

In Seoul, South Korean officials seem to agree with Tillerson's comment. A top official said "I do not believe the situation has reached a state of crisis, and rather think we may turn this into an opportunity to overcome the serious security condition." The South Korean news agency Yonhap reported his comments.

Hai Do adapted this story for VOA Learning English based on VOA News and Yonhap reports. George Grow was the editor.

rhetoric - n. language that is intended to influence people and that may not be honest or reasonable

translate - v. to change into a different form

shift - n. a change in position

strategy - n. a careful plan for achieving a particular goal over a long period of time

proliferation - n. an increase in number or amount quickly