Update Required To play the media you will need to either update your browser to a recent version or update your Flash plugin.
By VOA
08 October, 2018

Years ago, syphilis was nearly defeated as a public health threat in the United States. American doctors used antibiotic drugs to fight the disease. But now, the infection rate is on the rise. And syphilis is affecting those most at risk -- newborn babies.

The number of babies born infected with syphilis in the U.S. has more than doubled since 2013. This information comes from the Centers for Disease Control and Prevention (CDC). 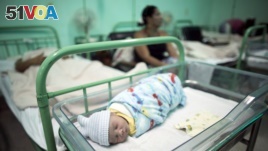 FILE - A newborn rests near his mother at a hospital in Camaguey, Cuba, June 2015. It was in that month that the WHO named Cuba the first country in the world to eliminate the transmission of HIV and syphilis from mother to child.

Syphilis is a Sexually Transmitted Disease, or STD, meaning it is spread mainly through sexual activity. Congenital syphilis is when the disease is passed directly from the mother to the baby.

David Harvey heads the National Coalition of STD Directors. He said that "When a baby gets syphilis, it means the (healthcare) system has failed that mother repeatedly, both before and during her pregnancy."

Harvey added that if STD prevention programs had the support they need, no new mother would ever have to deal with a terrible syphilis diagnosis.

He said, "That we have any cases of syphilis among newborns, let alone an increasing number, is a failure of the health care system."

In an interview with CNN, Harvey said that one of the reasons the U.S. is seeing more congenital syphilis has to do with the opioid problem in America. He said public health experts are aware that women are trading sex for drugs. And that, he adds, "explains some of the infections we are seeing in babies of syphilis."

Gail Bolan is the director of the CDC's Division of STD Prevention. In a 2017 statement, she said, "Every baby born with syphilis represents a tragic systems failure. All it takes is a simple STD test and antibiotic treatment to prevent this enormous heartache and help assure a healthy start for the next generation of Americans."

Last year, the CDC published a fact sheet on the state of STDs in the country. The document noted that in recent years "more than half of state and local STD program budgets have been cut." These cuts have affected the services provided at healthcare centers around the country.

The CDC also noted that the amount of money patients must pay to healthcare providers for STD testing and treatment has increased in recent years.

Doctors can easily treat syphilis with antibiotics. However, when left untreated in the mother, the infection increases the risk of newborn death. The woman could lose the fetus before it is able to survive independently. Children born with syphilis can suffer severe health problems, including deformed bones, blindness or deafness.

About 70 percent of congenital syphilis cases nationwide are in just five states. They are California, Florida, Louisiana, New Mexico and Texas.

Of the babies born with the disease, one third of the mothers had been tested. But the tests were performed too late to prevent the infection of the fetus, or the woman became infected after being tested.

Congenital syphilis is only a part of the growing STD crisis in the United States. The CDC says nearly 2.3 million cases of chlamydia, gonorrhea and syphilis were identified nationwide in 2017. This is the highest number on record.

In 2016, the World Health Organization estimated that more than 1 million sexually transmitted infections (STIs) are acquired every day worldwide.

If you are sexually active, the CDC suggests two things to protect yourself from getting syphilis:

The CDC also suggests that anyone who has more than one sexual partner get tested for all STDs.

diagnosis – n. the art or act of identifying a disease from its signs and symptoms

fetus – n. a developing human from usually two months after conception to birth

acquire – v. to get (something)

condom – n. a thin rubber covering that a man wears on his penis during sex in order to prevent a woman from becoming pregnant or to prevent the spread of diseases