Number of English Learners in US Schools Keeps Rising

Update Required To play the media you will need to either update your browser to a recent version or update your Flash plugin.
By Bryan Lynn
30 October, 2018


The number of English language learners in American public schools continues to rise.

About 9.5 percent of public school students were English language learners in 2015, the U.S. Department of Education reports. That was about 4.8 million students across the country.

That number had risen from 8.1 percent – or 3.8 million students – in 2000, the department's National Center for Education Statistics said.

The results were also reported by the Pew Research Center.

The goal is to give students the language skills they need to fully take part in educational activities and help them succeed in the classroom. Studies have shown clear links between English-language proficiency and improved educational results.

The state with the highest number of ELL students is California. Twenty-one percent of its public school students were English language learners in 2015. The next highest states were Texas and Nevada. Nearly 17 percent of both states' students were ELLs.

In eight states, ELLs made up 10 percent or more of the total public school students. 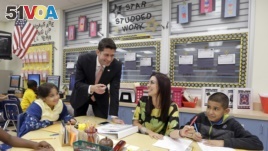 Thirty-six states and the District of Columbia saw a rise in the number of ELL students from 2010 to 2015. The largest increase – 3 percent – was reported in Massachusetts.

In 14 states, the percentage of ELLs fell in 2015 compared to 2010. The largest drop, which was 4 percent, was reported in the western state of Nevada.

Spanish is by far the most common language spoken at home by ELLs. About 77 percent of the students said they mainly spoke Spanish at home, the education report said. Twenty-one percent of Spanish-speaking ELLs live in California.

Chinese is the third most commonly spoken language by American ELL students. About 2 percent of the total – or about 101,000 students - identified themselves as Chinese speakers at home. Pew's report also noted that across all 50 states, Chinese is among the five most common languages spoken by ELLs.

Vietnamese is the fourth most common language. About 81,000 ELL students reported speaking Vietnamese at home. That is 1.7 percent of all ELLs.

In Hawaii and Alaska, however, the most common language spoken by the states' ELLs were none of the major languages reported across the country. Instead, the most commonly spoken languages match each state's main immigrant or indigenous populations, the Migration Policy Institute reported.

In Hawaii, 21 percent of students reported speaking Ilokano, a language native to the Philippines. In Alaska, 40 percent reported speaking Yupik – a family of languages used by the Yupik indigenous population.

About 14 percent of ELLs live in cities, the National Center for Education Statistics reported. Nine percent live in suburban areas. And around 6.5 percent lived in small towns, while 3.6 percent were in rural areas.

Not surprisingly, most English language learners were in lower grade levels. In 2015, 67 percent of students were either in kindergarten or grades 1 through 5. The other 33 percent were in sixth through 12th grades.

proficiency – n. the ability to do something very well

indigenous – adj. having always lived or existed in a place

suburban – adj. relating to an area outside the city where people live