Number of US Students Studying Abroad Continues to Grow

Update Required To play the media you will need to either update your browser to a recent version or update your Flash plugin.
By Pete Musto
15 December, 2018


Frances Downey grew up listening to stories about her mother studying at a university outside of the United States.

Her mother spent one year studying abroad through an international exchange program with a French school. She often talked about how exciting and interesting the experience was.

So, even before Downey finished high school, she had decided she would someday follow her mother's path.

The Silver Spring, Maryland-native began studying architecture at Lehigh University in Bethlehem, Pennsylvania in 2004. Near the end of her second year, Downey started to feel unhappy with her school and decided it was time to study abroad.

U.S. colleges and universities commonly have partnerships and joint programs with foreign schools that permit student exchanges. These programs usually last half or sometimes a whole school year. The classes students take abroad usually give them credit toward their degree.

In a four-year degree program, the third year is the most common time for American college students to study abroad. Many students feel they need a change before what is usually their final and most difficult year of study.

Downey said her school did not want her to go at first. The architecture program at Lehigh is very intense, and her professors were worried she might miss learning important material. However, she was eventually able to get special permission to study outside Lehigh. 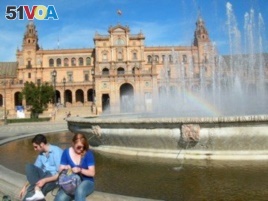 Frances Downey sits in the Plaza de Espa&#241;a in Seville, Spain during her time studying there in 2007.

She chose to study internationally for a whole year. During the fall 2006 term, she attended the Danish International School in Copenhagen, Denmark. Downey said she did so because Danish architects are known for their housing design.

Downey also was studying the Spanish language at the time. So she chose to spend her spring 2007 term at the University of Sevilla in Spain.

Downey notes that it was not an easy experience. As a young adult on her own, it was difficult for her to deal with travel document and transportation issues. Staying in contact with friends and family back home proved difficult too.

However, she had a lot of emotional and financial support from her family. She said she learned life lessons and made friendships and memories that have lasted to this day. She liked being abroad so much that during the 2007 summer break, she spent several weeks on a study trip through Lehigh in Vicenza, Italy.

"The more you're out of your comfort zone, the more rewarding the experience is in the end," Downey told VOA.

Why the continued growth?

Recent research suggests that the number of students with experiences like Downey's continues to grow. 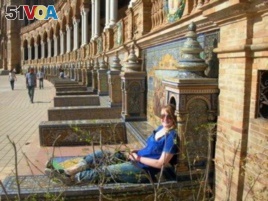 Frances Downey sits at the Plaza de Espa&#241;a in Seville, Spain during her time studying there in 2007.

Peggy Blumenthal is an advisor with the IIE. She said that the rate of growth shrank after the U.S. recession in 2008. But even problems like political unrest in a host-country effect only the number of students going to that country. The overall growth in Americans studying abroad continues, Blumenthal said.

Blumenthal notes that educators have long seen the value in international student exchanges. She said that most Americans do not travel far from home to attend a college or university. For that reason, they are not often put in situations that are unfamiliar. A study abroad program can teach students independence and important life skills.

But even more schools and parents are now starting to see the value in international experience, Blumenthal said. And more companies want employees who speak foreign languages and know how to deal with people from other cultures.

"Realizing that not everybody sees the world the way Americans see the world, that's crucial if you're going to succeed in a multicultural professional environment," she said.

Blumenthal noted that many U.S. colleges and universities have increased partnerships with foreign institutions and companies. They also have added more short-term international study programs. These programs are usually operated by the American schools. They make it easier for students to find the finances to study abroad. 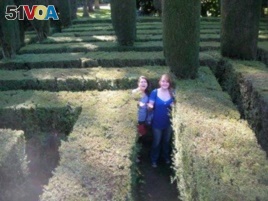 Frances Downey stands in the gardens of the Alc&#225;zar of Seville during her time studying there in 2007.

The U.S. government also has expanded financial assistance for international study through its Benjamin A. Gilman and Fulbright programs. And, foreign institutions are increasing efforts to match their study programs with American ones.

For example, in November, France's prime minister announced a plan to get more of the country's top institutions to offer programs in English.

However, Blumenthal said, there is one group of American students who do not study abroad at the same rates as others: minorities. The 2018 Open Doors report showed that, while nonwhite students make up 42 percent of all college students in the U.S., only 29 percent of students studying abroad were nonwhite.

Pete Musto reported this story for VOA Learning English. Mario Ritter Jr. was the editor. We want to hear from you. How common is it for people in from your country to study at a foreign college or university? Write to us in the Comments Section or on 51VOA.COM.

abroad – adv. in or to a foreign country

credit – n. a unit that measures a student's progress towards earning a degree in a school or college

comfort zone – n. a place, situation, or level where someone feels they can do something well or succeed at something and causes no worries, difficulty, or uncertainty

rewarding – adj. giving you a good feeling that you have done something valuable or important

realizing – v. understanding or becoming aware of something