Number of Venezuelans Trying to Cross into US Increased in August

Update Required To play the media you will need to either update your browser to a recent version or update your Flash plugin.
By Dan Friedell
20 September 2022


Venezuelan migrants have been in the news lately in the United States.

About 50 Venezuelans arrived by airplane on the small Massachusetts island of Martha's Vineyard on September 14. No one on the island was expecting the migrants.

The migrants had crossed the U.S.-Mexico border to enter the state of Texas. After a few days, they were sent to Massachusetts by the Republican governor of Florida who is critical of the border policies under President Joe Biden's administration. 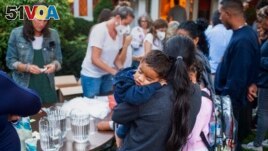 A woman, who is part of a group of immigrants that had just arrived holds a child as they are fed outside St. Andrews Episcopal Church, Sept. 14, 2022, in Edgartown, Mass., on Martha's Vineyard. (Ray Ewing/Vineyard Gazette via AP)

Venezuelan migrants also made news in early September when it was reported that six people drowned crossing the Rio Grande river near Eagle Pass, Texas. Five of the dead were from Venezuela.

The U.S. government reported that border officials stopped Venezuelans over 25,000 times in August. That number was 43 percent higher than the number in July and four times the number from the same month one year earlier.

Between October 2021 and August 2022, the U.S. stopped 2.15 million migrants overall. That was almost 40 percent more than the year before. And it was the first time that the number was higher than 2 million.

One reason the number is so high is that some people try to cross several times. During the pandemic, the U.S. established a rule that denies a right to seek asylum while giving no penalty for illegal crossing.

Chris Magnus heads the U.S. agency which oversees the Border Patrol. He said, "Failing communist regimes in Venezuela, Nicaragua, and Cuba are driving a new wave of migration across the Western Hemisphere, including the recent increase in encounters at the southwest U.S. border."

IOM, the United Nations organization that works with migrants, says most Venezuelans are leaving because of political problems and a troubled economy. The UN's refugee agency, UNHCR, says there are over 6 million Venezuelans around the world who live somewhere else now because of those problems.

Crossing by Venezuelans to the U.S. went down earlier this year, as Mexico made rules restricting the arrival of airplanes from Venezuela. But now more are arriving by land.

One Venezuelan migrant told the newspaper in Martha's Vineyard that she had crossed through 10 countries before arriving in Texas.

drown –v. to die by being under water too long

penalty –n. punishment for breaking a rule or law

regime –n. a form of government