Update Required To play the media you will need to either update your browser to a recent version or update your Flash plugin.
By Christopher Jones-Cruise
27 October, 2017


Millions of children dream of going to Disney World, the most famous theme park in America. Families travel to the Orlando, Florida site from all around the United States and the world.

But many children are too poor to ever get inside the park, even those who live in the neighborhood -- like the group of young characters in the new film, The Florida Project.

In the movie, Disney World serves as a symbol of the social divide in the U.S. Most of the young characters are one or both parents. They live in a couple of small motels along a big road near Disney World. 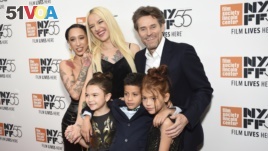 Sean Baker is the director of the movie.

"My co-screenwriter brought this topic to my attention, the fact that there are families with children living in budget motels outside of what we consider the happiest place on Earth -- a place for children -- and that juxtaposition obviously grabbed me."

The leader of the somewhat wild, rarely supervised band of children is six-year-old Moonee, played by Brooklynn Prince.

"The man who lives in here gets arrested a lot. These are the rooms we're not supposed to go in -- but let's go anyway!"

Bria Vinaite plays Moonee's childlike mother Halley. Halley loves her daughter but lacks some basic parenting skills and a job. She turns to prostitution, endangering her daughter and their life together.

Vinaite says life is very difficult for the kind of woman she plays in the film.

Actor Willem Dafoe plays Bobby, caretaker of the motel. He tries to help the children stay out of trouble. He is both their disciplinarian and protector.

At one point in the film, Bobby criticizes Moonie's mother.

"When your friend puts you in charge of her kid, that kid becomes your responsibility."

Bobby is based on a real motel caretaker in Florida.

Director Baker said when Dafoe got the part, he wanted to fully understand the world created in the movie.

Baker said Dafoe came to the set a week early. He interviewed the motel owner and others. And then, Baker said "one day, he comes to the set and he has this spray tan on, and he had all kinds of accessories he chose building this Florida man as his character."

Baker said the film shows Americans struggling to survive. He made the movie after he watched The Little Rascals series of short films from the 1920s and 1930s. The series is about a group of neighborhood kids getting into trouble. They show how children dealt with poverty during the period of American economic failure known as the Great Depression.

Director Baker said he found Vinaite on the social media site Instagram. She and Brooklynn Prince had never acted before.

Vinaite said she had not known before the movie that there were single mothers who struggled so much and were so close to homelessness. She said Baker drove her around Orlando to meet some of the women who lived in the budget motels. Vinaite said she returned to her hotel room and cried.

Brooklynn Prince said when she watched the film, she felt the pain of the characters.

"I cry at the end too, like on the screen. I cry. I cried just watching it."

theme – n. the subject or idea on which the style of something (such as an event or place) is based

prostitution – n. the act of having sex in exchange for money

disciplinarian – n. a person who acts to make sure that rules or orders are obeyed

spray tan – n. a beauty product to temporarily make one's skin darker, as if the sun has done so

accessories – n. something added to something else to make it more useful, attractive, or effective

juxtaposition – n. to place (different things) together in order to create an interesting effect or to show how they are the same or different

screen – n. a large, flat, white surface on which images or movies are shown