Update Required To play the media you will need to either update your browser to a recent version or update your Flash plugin.
By Michael Lamon
28 October, 2015

A proposed law would punish people for renting out their homes fewer than 30 days. Airbnb promises to fight the proposed regulation. Airbnb asked its customers to sign a paper, or petition, against the law.

Airbnb is website for people advertise and look for short-term rentals. For many, Airbnb is a cheap alternative to a hotel. 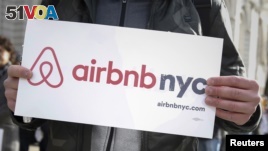 Supporters of Airbnb stand during a rally before a hearing called "Short Term Rentals: Stimulating the Economy or Destabilizing Neighborhoods?" at City Hall in New York, Jan. 20, 2015.

Hotel rooms in New York City average about $250 per night. International travelers often book short visits to New York on Airbnb. But New York state law prohibits people from renting out an entire home or apartment to someone for fewer than 30 days.

Owners and tenants may rent out part of their apartment or home. But they must stay on the property during the short-term stay.

Chris Lehane is Airbnb's Global Head of Public Policy. He started the petition against the law, "The New York City Council could cause thousands of everyday New Yorkers to lose their homes or make it harder for them to get by," he said.

City Councilwoman Helen Rosenthal said the increased penalties were not meant to hurt people, "but at protecting the New York City housing stock." There is worry that using so many apartments short-term rentals drives up housing prices for everyone.

The councilwoman's spokesperson, Stephanie Buhle, said the goal is to protect low-income tenants. She gave the example of a low-income apartment building that listed 80 percent of its units as hotel rooms. Residents complained, and the city fined the owner only $800.

"Our housing stock is really valuable, and [landlords] are using it for [their] own good," said Buhle, who added that the city suspects there to be more than 16,000 illegal hotels in NYC.

Airbnb says nearly eight in 10 of its hosts are low to middle income. Many of them need additional income to remain in their homes or apartment.

According to the city council's website, the amendment is being considered by a council committee. It may or may not actually become a law.

New York City is not the only city to propose laws against short-term home-sharing. San Francisco will vote on November 3 whether to limit short-term rentals to 75 days a year. The current limit is 90 days. The proposed law would require hosting sites like Airbnb to take down listings that violate the limit.

In an agreement with the city of Chicago, Airbnb recently began collecting hotel tax in order to stay in business there.

Airbnb was created seven years ago and has grown very fast in the digital age. The company lists about 1.2 million rentals worldwide on its website, according to the Los Angeles Times. Cities across the country are trying to figure out how to best tax and manage this industry.

short-term rental – n. renting out a house or apartment for less than 30 days

tenant – n. a person, business, group, etc., that pays to use another person's property : someone who rents or leases a house, apartment, etc., from a landlord

housing stock – n. the total number of housing units in an area

regulators – n. an official who works for the part of the government that controls a public activity (such as banking or insurance) by making and enforcing rules

amendment – n. a change in the words or meaning of a law or document (such as a constitution)