Update Required To play the media you will need to either update your browser to a recent version or update your Flash plugin.
By VOA
26 June, 2014

President Barack Obama has launched a new effort to protect parts of the Pacific Ocean from overfishing and environmental damage. He announced his plan in a video message to an international conference on the oceans. The meeting took place last week at the State Department here in Washington.

For years, scientists and environmentalists have warned that oceans are worsening because of human activity, mainly pollution and overfishing. Political leaders in the United States and other countries have lacked the will to do much about it. Now, the Obama administration is taking a step in that direction.

President Obama said last Tuesday that he has directed the federal government to create a plan to stop illegal fishing and pollution in the Pacific Ocean.

"Pollution endangers marine life, overfishing threatens whole species as well as the people who depend on them for food and their livelihoods. If we ignore these problems, if we drain our oceans of their resources, we won't just be squandering one of humanities' greatest treasures, we'll be cutting off one of the world's major sources of food and economic growth, including for the United States, and we cannot afford to let that happen." 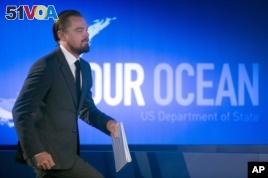 Some of the possible measures are expected to fuel political battles in Washington. One is a ban on fishing and industrial exploration in parts of the central Pacific.

"I'm going to use my authority as president to protect some of our most precious marine landscapes, just like we do for mountains, and rivers and forests."

American actor Leonardo DiCaprio is an environmental activist. He supports the president's plan.

"Several billion people a year depend on seafood as a source of protein and yet we are failing to protect these vital waters. If we don't do something to save our oceans now, it won't be just the sharks and the dolphins that will suffer – it will be all of us, including our children and our grandchildren"

Secretary of State John Kerry spoke to delegates attending the conference. They included government ministers, scientists and members of the international oceans community.

"We have today received commitments for action over $1 billion, 450-million and that is all directed at this ocean effort."

Secretary Kerry also reported progress in efforts to get more nations to approve a proposed international port law. The measure would prevent illegally caught fish from going to market.

President Obama's plan is to take effect later this year.

This report was based on a story from VOA's Roseanne Skirble.