Obama Appeals to UN in Effort Against IS Militants

Update Required To play the media you will need to either update your browser to a recent version or update your Flash plugin.
By VOA
24 September, 2014


President Barack Obama on Wednesday called on the world "to join him in an effort to degrade and ultimately destroy" Islamic State militants.

Mr. Obama appealed to the world community in his address to the U.N. General Assembly in New York. The president had this to say:

"Mothers, sisters and daughters have been subjected to rape as a weapon of war. Innocent children have been gunned down. Bodies have been dumped in mass graves. Religious minorities have been starved to death. In the most horrific crimes imaginable, innocent human beings have been beheaded, with videos of the atrocity distributed to shock the conscience of the world."

President Obama also noted that more than 40 nations have offered to join the U.S. in the fight against the IS militants. He added that the U.S. will not "send U.S. troops to occupy foreign land" but "will train and equip forces fighting against these terrorists on the ground."

In his speech, the U.S. president presented his vision of American leadership in a changing world, the fight to contain Ebola, the ceasefire in eastern Ukraine and the effort against greenhouse gas.

Algerian militants have released a video to show the beheading of French tourist Herve Gourdel. The group said the killing was a response to French action against the Islamic State militants in Iraq. 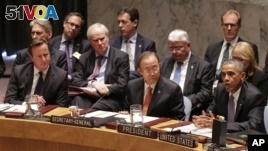 According to the Reuters news agency, Gourdel is seen, in the video, kneeling with his arms tied behind his back before four masked militants. A militant reads a statement in Arabic critical of France's action.

"This is why the Caliphate Soldiers in Algeria have decided to punish France, by executing this man, and to defend our beloved Islamic State,"

The video does not show the beheading, but a militant holds the head up to the camera.

Students marched through the business district of Hong Kong as part of a protest to demand free elections in 2017.

Thousands of university students are staying away from classes all week to take part in the pro-democracy campaign. The students are protesting China's decision not to permit what they consider fully democratic elections in the former British territory.

Last month, China ruled that its own committee must approve all candidates for Hong Kong's chief executive.

behead – v. to cut off the head of (someone) especially as a punishment

conscience – n. the part of the mind that makes you aware of your actions as being either morally right or wrong

degrade – v. to cause (something complex) to break down into simple substances or parts

execute – v. to kill (someone) especially as punishment for a crime