Update Required To play the media you will need to either update your browser to a recent version or update your Flash plugin.
By Marsha James
01 January, 2015


President Barack Obama is entering the final two years of his presidency. The American economy is stronger now than at any time since he took office in 2009.

Mr. Obama says that, with the economy stronger, he is able to work on what he calls ‘long term' projects in national and foreign affairs. The president spoke with National Public Radio on Monday. He also said he would not dismiss the possibility of improved relations with Iran.

Mr. Obama says his executive actions in recent weeks on immigration and Cuba were the result of years of work. He says he had expected 2014 to be a breakthrough year – one of important developments. And after six years in office and an improving economy, he finally had the chance to deal with some difficult issues. 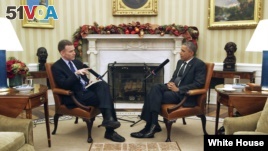 "But, at the end of 2014, I could look back and say we are as well-positioned today as we have been in quite some time economically, that American leadership is more needed around the world than ever before and that is liberating in the sense that a lot of the work that we've done is now beginning to bear fruit. And, it gives me an opportunity then to start focusing on some of the other hard challenges that I didn't always have the time or capacity to get to earlier in my presidency."

Mr. Obama says he now wants to attend to ‘long term projects' -- such as making sure an improving economy helps all Americans. He also spoke about international issues.

"...even as we're managing ISIL (Islamic State of Iraq and the Levant) and trying to roll them back and ultimately defeat them, even as we've been executing the drawdown in Afghanistan in a responsible way, the moves like the Cuba diplomatic initiative are ones that I want to make sure I continue to pursue partly because, frankly, it's easier for a president to do at the end of his term than a new president coming in."

The president was asked if he can imagine opening an embassy in Tehran as he re-establishes ties with Cuba. Mr. Obama said the two countries are different. He said that, after 50 years of the same policy, it was time for a change with a small country that does not seem to be a major threat to the United States. He called Iran a large, developed country with a history of state-supported terrorism. He added that Iran is hostile to Israel and seeks to develop a nuclear weapon.

Mr. Obama says improved relations with Iran will hinge on a verifiable nuclear agreement. Over time, he says, U.S. and international sanctions could be removed, and Iran could be treated like other countries. Mr. Obama added that would serve as the basis for improving relations.

The United States has not had diplomatic relations with Iran since 1980. Ties were cut after Iranian activists seized the U.S. embassy and took its employees hostage. The United States and five other nations have been negotiating for a peaceful, civilian Iranian nuclear program. Iran has long denied its program has a military purpose.

The negotiators reached an interim deal in November 2013, although the two sides have failed to reach a comprehensive agreement.

Mr. Obama also praised two countries for making progress in human rights, good governance and the rule of law. He pointed to Myanmar, also known as Burma, and Tunisia where democratic transformations appear to be taking place. He described them as areas where the United States can be ‘opportunistic' and do everything it can to help.

hinge – v. to be determined or decided by something

verify – v. to prove, show, find out, or state that something is true or correct

interim – n. a period of time between events

comprehensive – adj. including many, most or all things