Update Required To play the media you will need to either update your browser to a recent version or update your Flash plugin.
By George Grow
26 January, 2015


Rain has done little to reduce the excitement around President Barack Obama's visit to India. The president watched a military parade involving thousands of Indian troops on Monday.

The parade was part of Republic Day celebrations. Mr. Obama was the first United States president to attend the event, which celebrates India's first constitution as an independent state.

On Sunday, the president met with Indian Prime Minister Narendra Modi. The two men announced they have reached a "breakthrough" in a nuclear power agreement. 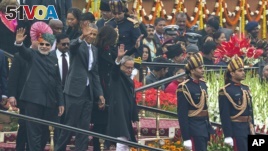 The United States signed an agreement with India in 2008 to provide civilian nuclear technology. But the treaty's enactment has been delayed because of an Indian law. The measure makes builders and suppliers of the equipment responsible for damages in case of an accident.

Both sides agreed Sunday to set up a financial protection system that does not force India to change its laws.

Greek voters ousted the New Democracy Party from power in general elections on Sunday. The elections made Alexis Tsipras, the chief of the Syriza Party, the country's new prime Minister. He is the youngest Greek prime minister in 150 years. Head of Syriza party Alexis Tsipras waves while leaving the party headquarters after winning the elections in Athens, January 25, 2015.

Syriza fell just two seats short in parliament of the 151 needed to rule on its own, without forming a coalition government.

The election results are likely to place Greece in conflict with the European Union and international creditors. Mr. Tsipras has promised to end years of tax increases and cuts in government programs. He has already gained the support of the Independent Greeks party. That could mean he could form a ruling coalition soon.

After the results were announced, Mr. Tsipras held talks with Panos Kammenos, the leader of Independent Greeks. The party has little in common with Syriza. But both oppose the international financial rescue plan for Greece.

The Ukrainian military announced Monday that seven of its soldiers have been killed in the past day during fighting in the country's east. Officials say more than 20 soldiers were wounded in the violence.

Ukrainian forces and pro-Russian separatists have clashed repeatedly in recent days. The fighting has been described as the worst since the two sides agreed on a ceasefire in September. President Obama and European leaders threatened new action against Russia after rebels launch a deadly rocket attack on the Ukrainian port of Mariupol on Saturday.

The official website of Malaysia Airlines has been attacked. A group claiming to support the Islamic State militant group says it carried out the attack.

The Malaysia Airlines homepage was later changed to an image of a lizard in a top hat. The claim of responsibility was changed to "Lizard Squad – Official Cyber Caliphate," with a link to the group's Twitter account.

This report was based on stories from VOA's News Division. George Grow wrote this newscast for VOA Learning English. Mario Ritter was the editor.

parade – n., a group of people and vehicles moving together to celebrate a special event or anniversary

independent – adj., not influenced by or controlled by another or others; free; separate

nuclear – adj., of or about the energy produced by splitting atoms or bringing them together; of or about weapons that explode by using energy from atoms