Obama Briefly Notes Foreign Policy in State of the Union

Update Required To play the media you will need to either update your browser to a recent version or update your Flash plugin.
By Anne Ball
21 January, 2015


Every year, the president of the United States must report to Congress on the state or condition of the country. So Tuesday night President Obama rode in a motorcade to the Capitol building to give his sixth State of the Union address.

Mr. Obama offered a plan he said would improve national and international security. He spoke about the first 15 years of the 21st century. He said the century began with the 2001 terrorist attacks against the United States, followed by two long and costly wars.

"It has been, and still is, a hard time for many. But tonight, we turn the page. The shadow of crisis has passed and the State of the Union is strong."

Most of the speech centered on domestic issues, ones that affect just U.S. citizens and families. But President Obama also spoke briefly about some foreign policy issues.

First was the need to fight terrorism. The recent killings in Paris have raised concerns about terrorism and security in the United States. 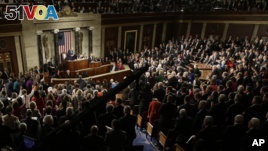 President Barack Obama gives his State of the Union address before a joint session of Congress on Capitol Hill in Washington, Tuesday, Jan. 20, 2015 (AP Photo/Jacquelyn Martin)

"We will continue to hunt down terrorists and dismantle their networks, and we reserve the right to act unilaterally, as we've done relentlessly since I took office to take out terrorists who pose a direct threat to us and to our allies."

America is working to stop the movement of Islamic State militants in Iraq and Syria, the president said. He called on Congress to pass a resolution to permit the use of force against the Islamic State.

But Republican Party lawmakers disagree with President Obama. Republican Senators John McCain and Lindsey Graham say the president has done a poor job of fighting the militant group, also known as ISIL. In a statement, they said the terrorist army continues to gain thousands of fighters. They also said ISIL now controls "significantly" more territory in Syria than when U.S. airstrikes began six months ago.

One thing that Republicans and President Obama's Democrats appear to agree on is neither party wants to send troops back to the Middle East.

After Mr. Obama's speech, Senator Joni Ernst spoke for the Republican Party. She said that Congress will discuss ways to take on terrorism, both individuals or groups like the Islamic State and al-Qaida.

"The forces of violence and oppression don't care about the innocent. We need a comprehensive plan to defeat them," she said.

The president also spoke about Iran. He threatened to veto any bill requiring new U.S. sanctions against Iran. He noted the two sides are taking part in international talks on Iran's nuclear program.

"There are no guarantees that negotiations will succeed. I keep all options on the table to prevents a nuclear Iran."

Then the president made this warning.

"But new sanctions passed by this Congress, at this moment in time, will all but guarantee that diplomacy fails—alienating America from its allies; making it harder to maintain sanctions; and ensuring that Iran starts up its nuclear program again."

President Obama also talked about his decision to re-establish diplomatic relations with Cuba.

"In Cuba, we are ending a policy that was long past its expiration date. When what you are doing doesn't work for fifty years, it's time to try something new."

Other foreign affairs subjects included his plan for preventing cyber attacks and the possibility of a trade agreement with Asian Pacific countries. Such a treaty might be another area where Democratic and Republican lawmakers can agree.

"In the Asia Pacific, we are modernizing alliances while making sure that other nations play by the rules – in how they trade, how they resolve maritime disputes, and how they participate in meeting common international challenges like nonproliferation and disaster relief."

Mr. Obama went on to say how important climate change is to the world.

He pointed to the success of the U.S.-China climate agreement as an example of how nations can work together to fix climate problems.

It was the first time that President Obama faced a Congress in which Republicans control both the Senate and the House of Representatives. The Republicans won control of both houses in the 2014 elections.

motorcade – n. a group of cars or other vehicles that travel together

domestic – adj. of, relating to, or made in your own country