He discussed the relationship during a White House meeting with Pakistan Prime Minister Nawaz Sharif on Thursday. The two leaders spoke of an enduring U.S.-Pakistan partnership. Relations between the two countries have slowly improved since 2011. That year, U.S. troops killed terrorist Osama bin Laden in Pakistan. Pakistani officials were angry that the Americans did not inform them before the raid. 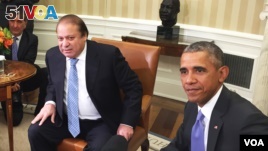 Mr. Sharif said he is working to prevent the Taliban from crossing Pakistan's border into Afghanistan. The president praised Pakistan for its "ongoing support to degrade and ultimately defeat al-Qaida and its affiliates." Al-Qaida is also an Islamic fundamentalist group in the Middle East.

The two leaders also agreed to reduce the threat of "nuclear terrorism." Pakistan has nuclear arms. United States officials want those weapons safeguarded from militants like the Taliban and al-Qaida.

The joint statement expressed support for a global agreement on climate change. It said Pakistan is "particularly vulnerable" to the affect of climate change. Pakistan has suffered major floods, heat waves, and droughts in recent years.

"With this funding, we're going to be building more than a dozen new schools and rehabilitating hundreds of others," Mrs. Obama said. "We're going to be setting up health screenings for thousands of girls to ensure they're getting the medical care they need."

The first lady's office says the Pakistani government has agreed to double spending for education by 2018. Since 2002, the United States provided $30 billion in aid, according to Foreign Affairs.

Bruce Alpert adapted this story for Learning English from 51voa.com. Hai Do was the editor.

safeguard – v. to make something safe or secure