Obama Asks Cuba to 'Leave the Past Behind'

Update Required To play the media you will need to either update your browser to a recent version or update your Flash plugin.
By VOA
22 March, 2016


President Barack Obama said it is time for the United States and Cuba to move beyond their differences and toward a future that will help both nations.

Obama made the statement during a televised speech in Cuba.

"I have come here to extend a hand of friendship to the Cuban people," Obama said. "It is time for us to leave the past behind. It won't be easy and there will be setbacks and it will take time."

He was speaking at the Gran Teatro de Havana. The gathering included Cuban President Raul Castro and other officials and civil leaders. Also present were members of Obama's government and U.S. lawmakers. 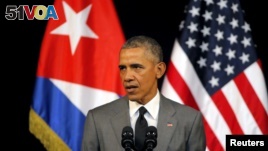 Obama expressed hope for future relations between the United States and Cuba and their peoples.

He said major policy changes between the former enemies must begin on a human level. He called for "understanding, forgiveness and listening."

The audience clapped loudly when Obama said he believes in the Cuban people. The American president spoke about the two nations' painful history and separation.

Obama also talked of the common values the nations share, including religion, patriotism, pride, family commitment and education. But he added there remain deep divisions in their beliefs on economic, societal and governmental issues.

Obama said directly to Castro, "You do not need to fear a threat from the United States." And he added that the Cuban government does not have to fear the voices of the Cuban people.

Obama said, "People should be able to criticize their government and choose those who govern them."

The United States began to ease restrictions on travel and business linked to Cuba with the renewal of diplomatic ties in July. But, President Obama said Tuesday more changes are needed, especially on human rights.

Castro has blamed the 55-year U.S. embargo on Cuba for many of the nation's problems. He has repeatedly urged Obama to pressure the U.S. Congress to end it.

Obama referred to that issue during his speech.

"As president of the United States, I have called on our Congress to lift the Cuban embargo," he said, to huge applause. "It is an outdated burden on the Cuban people, it's a burden on the Americans who want to work or do business or invest here in Cuba."

Lawmakers have criticized Obama's policy change from isolation to engagement with Cuba. Opponents say the policy compromises too much.

After the speech, both leaders left the crowded theater to as the audience stood and clapped.

Meeting with the Cuban people

Obama next went to the new U.S. Embassy in Havana where he met with Cuban dissidents and members of civil society.

Joined by U.S. Secretary of State John Kerry, the president spoke about the importance of hearing "directly" from Cubans as the U.S. shapes its policy toward Cuba.

"It requires, many times, great courage to be active in civil life here in Cuba", President Obama said. "This is an area where we continue to have deep differences" with the Cuban government.

Obama is attending a baseball game between Major League Baseball's Tampa Bay Rays and the Cuban national team. He will then depart for Argentina.

What do you think of U.S. policy on Cuba? We want to hear from you. Post a message in the Comments Section or on 51voa.com.

clap - v. to hit the palms of your hands together usually more than once usually to show approval or pleasure.

patriotism - n. love that people feel for their country

commitment - n. a promise to be loyal to someone or something

burden - n. someone or something that is very difficult to accept, do, or deal with