The Obama administration Tuesday took new steps to make it easier for Americans to visit Cuba.

Americans can now take "people-to-people" trips to Cuba on their own. It changes former rules that required most Americans visiting Cuba to sign up for costly group tours.

Americans will still have to fill out a form, saying their visits to Cuba are for education, not just the beach. 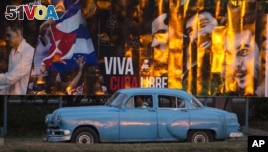 The new rules should help fill new commercial flights to Cuba, according to the Obama administration. U.S. airlines seek to begin regular flights to the island country in the next several months.

The new rules will also help Cuba. U.S. banks may process financial transactions from Cuba. A previous ban made it hard for Cuba to sell its products internationally.

And the rule will allow Cuban athletes, artists and performers working in the United States to earn a salary. But they will be required to obtain a U.S. visa.

The new rules could add to the number of Cubans playing Major League Baseball (or MLB). MLB officials hope Cuban players could play for MLB teams without having to give up their Cuban citizenship, as they do now.

The new rules are not all good news for Cuba. Not requiring Americans to sign up for expensive tours could cost the Cuban government millions of dollars annually, according to the Associated Press.

The Cuban government controls the tourism industry. It requires American groups to stay in state hotels and travel on state buses and use government registered tour guides, the Associated Press said.

The announcement comes one week before President Barack Obama is set to lead a large U.S. delegation to Cuba. The visit will be the first to Cuba by a U.S. president in 88 years.

Treasury Secretary Jacob Lew said the new rules will make it easier for Americans to visit Cuba. And it will provide benefits to the Cuban people, he said.

"Today's amendments build upon President Obama's historic actions to improve our country's relationship with Cuba and its people," Lew said.

Republican presidential candidates Ted Cruz of Texas and Marco Rubio of Florida are both Cuban-Americans. They said the United States should not ease restrictions on Cuba until its government allows free elections and releases political prisoners.

The embargo started in 1962 under President John Kennedy, as tensions increased between the communist government of Fidel Castro and the United States.

We want to hear from you. Write to us in the Comments Section or share your views on 51voa.com. Tell us if Cuba is a place you have visited, or want to visit.

regular – adj. running at the same time, every day

previous – adj. in effect in the past

embargo – n. happening over and over again at the same time or in the same way