Mr. Obama warned that greenhouse gas emissions are changing the global climate for the worse. He asked the world to respond quickly to cutting those emissions.

The American leader is visiting the remote U.S. state for three days. He is using its beautiful, but fragile landscape to call attention to the serious situation. Scientists say rising temperatures and unstable weather patterns will leave entire nations and major coastal cities underwater. 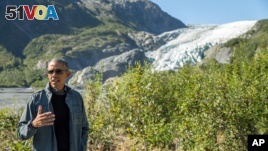 President Barack Obama speaks to members of the media while on a hike to the Exit Glacier in Seward, Alaska, Sept. 1, 2015. (AP Photo/Andrew Harnik)

But at the same time, Mr. Obama is asking the U.S. Congress to quickly approve funding for a new heavy icebreaker that costs $1 billion. He wants the ship completed two years earlier than planned.

The U.S. has two ice-breaking ships. Russia has 40.

A new, heavy duty ship might seem unnecessary if the ice cap is melting. Soon, ships will be able to cut through Arctic waters and shorten their trade routes.

Opening those routes increases risks for shipping and the environment. More drilling for oil and natural gas could lead to more spills and accidents.

The Arctic seabed is important to many countries because it may hold nearly a quarter of the world's oil and gas.

Mr. Obama declared climate change to be the defining threat of this century. He said the world is "not acting fast enough" to address climate change.

"On this issue of all issues, there is such a thing as being too late,'' he said. "And that moment is almost upon us."

"Human activity is disrupting the climate, in many ways, faster than we previously thought. The science is stark. It is sharpening. It proves that this once distance threat is now very much in the present."

Mr. Obama is the first U.S. president to visit the Arctic Circle while in office. He called the effects of climate change in Alaska devastating.

"Over the past 60 years, Alaska has warmed about twice as fast as the rest of the United States. Last year was Alaska's warmest year on record - just as it was for the rest of the world."

To his critics, the president said "there doesn't have to be a conflict between a sound environment and strong economic growth." Mr. Obama argues that the cost will be higher if nations do nothing to combat climate change.

"The time to plead ignorance is surely past. Those who want to ignore the science, they are increasingly alone. They are on their own shrinking island."

At a U.S. State Department conference in Alaska on Monday, officials from the U.S., France, South Korea, Singapore and other countries announced their commitment to take "urgent" action against climate change. They, too, want to slow the pace of global warming in the fragile Arctic region.

"We take seriously warnings by scientists," they said in a joint statement.

"Temperatures at the Arctic are increasing at more than twice the average global rate. Loss of Arctic snow and ice is accelerating the warming of the planet as a whole," they said.

Officials will meet again at a U.N. conference on climate change later this year in Paris, France.

emission (s) –n. sending out something , like gas, from a source

doomsday –n. the day the world is destroyed

stark – adj. having a plain, empty or cold appearance

swiftest shoreline erosion – phrase. the edge of the shore is quickly being worn away