Update Required To play the media you will need to either update your browser to a recent version or update your Flash plugin.
By Kathleen Struck and Jim Dresbach
27 May, 2016


President Barack Obama laid a wreath in the Japanese city of Hiroshima on Friday.

Obama is the first American president to visit Hiroshima while in office. The United States dropped an atomic bomb on the city. The bombing there and in the Japanese city of Nagasaki brought a swift end to World War II.

Thousands at the ceremony watched as the U.S. president stood next to Japanese Prime Minister Shinzo Abe at the Peace Memorial Park. Obama then bowed briefly and placed the wreath at the arch memorial built to remember the dead and injured.

"Death fell from the sky and the world was changed," Obama said.

The president then met briefly with two survivors who were at the ceremony. He held the hand of 91-year-old Sunao Tsuboi and hugged an emotional Shigeaki Mori.

Obama talked about the horrors of war and the need to work toward a world without nuclear weapons.

"Technological progress without an equivalent progress in human institutions can doom us," he said. Revolutions, or great leaps forward, in technology "requires a moral revolution as well."

"This tragedy must not be repeated again," said Abe in his speech at Hiroshima. "We are determined to realize a world free of nuclear weapons," he said.

Some Americans objected to Obama's visit to Hiroshima. They saw his visit as disrespectful to U.S. veterans who fought in the war. For many older Americans, the visit is a painful reminder of conflict and lost lives.

The United States dropped a powerful atomic bomb on Hiroshima and a second atomic bomb on Nagasaki in August, 1945. Japan was at war with the U.S., Britain, France, China and other nations -- which formed a group called the Allies. The Allies fought against Japan, Germany and Italy -- which were known as the Axis powers. This Sept. 8, 1945 picture shows an allied correspondent standing in the rubble in front of the shell of a building that once was a movie theater in Hiroshima, Japan, a month after the first atomic bomb ever used in warfare was dropped by the U.S.

The atomic bombs did two things: First, they killed 140,000 people in Hiroshima and 70,000 in Nagasaki. Many people died later of burns and the from the effects of radiation. The bombs also destroyed both cities, leaving few structures standing.

Secondly, the bombings brought an end to World War II. They stopped Japan from its attempt to control East Asia.

Less than two weeks after the attacks, Japan announced its surrender. Japan said it surrendered because of the power of "a new and most cruel bomb" according to History.com.

Since then, Japan has rebuilt and become a modern, rich nation with the help of the United States. 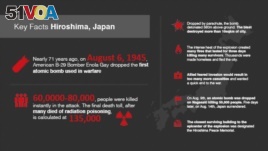 Chris Appy, a professor at the University of Massachusetts, spoke to VOA before the president's visit.

"I was very pleased that he decided to go. I think just showing up is (an) important symbolic act that many Japanese have wanted for a long time."

But Appy said he was disappointed that Obama, in his words, "appears not willing to apologize."

"After all, I think in our personal lives we consider it the height of maturity when (an) adult is, is willing to take responsibility and accountability for actions -- particularly actions that lead to the suffering of innocent victims."

Professor Appy said "apology and forgiveness are important in Japan."

American officials said before the trip that the president would not apologize.

"As a Japanese national, I want to give a sincere welcome to President Barack Obama. I think we don't need his apology," wrote Kiyohisa Miki from Japan on VOAnews.com. "As President Obama said, Japan and America got over past divides. And now we are important friends for each other. This is enough right?"

Correspondent Cindy Saine reported this story from Hiroshima. Kathleen Struck and Jim Dresbach adapted her story for Learning English. Hai Do and George Grow were the editors.

wreath – n. a mix of leaves and flowers in the shape of a circle that is placed on a marker as a sign of honor

hug – v. to put one's arms around someone

veteran – n. someone who fought in a war as a soldier or sailor

reminder - n. to make someone think about something again