Update Required To play the media you will need to either update your browser to a recent version or update your Flash plugin.
By VOA
17 June, 2014

A debate has continued for years in the United States about sports-related brain injuries, or concussions. Conflicting studies add fuel to arguments on both sides.

Now the U.S. President has stepped into the middle of the debate. Barack Obama held an informational meeting on the subject last month at the White House. He gathered representatives of professional sports groups, coaches, parents, young athletes and medical professionals to discuss the issue.

American football is the sport often at the center of the concussion debate. But, a high school soccer player opened the meeting. Tori Bellucci is a skilled athlete. But she had to reject a college scholarship to play soccer after experiencing five concussions.

"The reason we're here today though is, all across the country parents are also having a more troubling conversation and that's about the risks of concussions. There's a lot of concern but there's a lot of uncertainty. And as Tori's story suggests, concussions are not just a football issue. Every season you've got boys and girls who are getting concussions in lacrosse and soccer and wrestling and ice hockey as well as football." 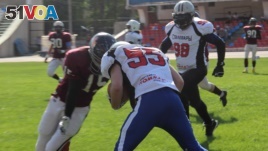 Tackling in American football can involve the head which is how many concussions occur.

Mr. Obama notes that sports-related head injuries are increasing each year among young people. He suggests that one reason for the rise could be that parents, teachers and coaches now better recognize the signs of a concussion. These signs include lack of balance, unclear thinking, head pain and problems with eyesight.

The president says he does not want young people to avoid sports. Instead he is calling for more research.

"We want our kids participating in sports. I'd be much more troubled if young people were shying away from sports. As parents though, we want to keep them safe and that means we have to have better information. The fact is, we don't have solid numbers. And that tells me that at every level we're still trying to fully grasp what's going on with this issue."

Mr. Obama says that there is one thing all sides can agree on -- the fact that sports are very important, or vital, to American culture, identity and economy. But, he warns that sports need to be as safe as possible for young people to play.

"The one thing we can agree on is that sports are vital to this country. And it's a responsibility for us to make sure that young, talented kids like Tori are able to participate as safely as possible. And that we are doing our job both as parents, school administrators, coaches ... to look after them."

To help reach that goal, he announced a joint effort from the National Collegiate Athletic Association and the Department of Defense. He said the $30 million project will carry out the widest study ever of concussions.