Update Required To play the media you will need to either update your browser to a recent version or update your Flash plugin.
By Dan Friedell
26 October, 2016

President Barack Obama's eight years in office will come to an end in January.

And, he will be celebrating his final Thanksgiving in office in November. 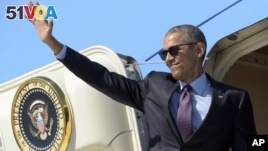 There will be many more "last" things for the Obamas in the coming weeks.

One last thing President Obama did this week was read "Mean Tweets" about himself on television.

Twitter, Facebook and other forms of social media have become extremely popular during Obama's eight years in office.

"Mean Tweets" is a regular –and popular -- part of Jimmy Kimmel's late-night television show. He invites celebrities to look at Twitter and read negative comments that people have written about them.

President Obama appeared on Kimmel's "Mean Tweets" for the first time in 2015. That two-minute video has more than 46 million views on YouTube. One of the comments President Obama read said that he didn't look stylish in a pair of jeans.

Criticism of his pants returned this week, as Obama read the latest tweets about himself on Jimmy Kimmel Live. More than 9 million people have already watched the video.

One on of the tweets Obama read was: "Barack Obama dances like his jeans look."

The President addressed many other critical tweets in the video. One person blamed him for a hair-care product not working.

Obama also read a tweet from Republican presidential candidate Donald Trump. Trump once tweeted: "President Obama will go down as perhaps the worst president in the history of the United States!"

Obama said of the tweet: "At least I will go down as a president."

The audience cheered and Obama dropped the phone from which he was reading.

What do you think of Obama's "Mean Tweets" appearance? We want to know. Write to us in the Comments Section or on 51VOA.COM.

host – v. to put on an event or welcome people to a social event

stylish – adj. following the popular way something looks or is worn