Update Required To play the media you will need to either update your browser to a recent version or update your Flash plugin.
By VOA
09 November, 2015

The two leaders discussed security issues in the Middle East and U.S. military aid to Israel.

The visit marked the first time Obama and Netanyahu met since the Iran nuclear deal, negotiated in July by the U.S. and five other world powers. 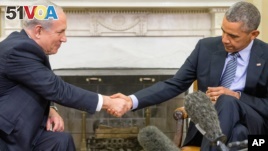 The Israeli leader has strongly opposed the Iran deal. He said it would not slow Tehran's work toward a nuclear weapon. He also said the deal would put Israel in danger. Netanyahu discussed his concerns in March in his address to the Republican-controlled U.S. Congress. Netanyahu and Obama did not meet during that visit.

However, Obama called the Iran deal a "narrow issue" of disagreement between the two leaders. He also called "the security of Israel one of my top foreign policy objectives."

Obama administration officials said last week that the U.S. president no longer believes that agreement on creation of a Palestinian state can be reached before he leaves office in early 2017.

Netanyahu told Obama on Monday that he remained committed to a two-state solution to the Israeli-Palestinian conflict. He also said that any Palestinian state must be demilitarized and recognize Israel as the homeland of the Jewish people.

Ken Bredemeier reported this story for VOA News. Ashley Thompson adapted it for Learning English, with additional reporting from Reuters. Kathleen Struck was the editor.

Do you have an opinion about relations between Israel and the U.S.? Please leave us a comment and post on 51VOA.COM.

aid - n. something (such as money, food, or equipment) that is given by a government or an organization to help the people in a country or area where many people are suffering because of poverty, disease, etc.

narrow - adj. : including or involving a small number of things or people : limited in range or amount

demilitarized - v. to remove weapons and military forces from (an area) — usually used as (be) demilitarized

homeland - n. a usually large area where a particular group of people can live