Update Required To play the media you will need to either update your browser to a recent version or update your Flash plugin.
By VOA
10 November, 2014


President Barack Obama spoke about the election results at a news conference Wednesday. He said he is looking for broad agreement with Congress. But, he also said it is likely that the new Republican controlled Congress may approve some legislation he cannot and would not sign.

Mr. Obama said he is sure that he and Republican lawmakers can agree on some issues. The Republican Party won full control of both houses of Congress in elections Tuesday. The party has not held that power since 2007.

Ukraine's Prime Minister Arseniy Yatsenyuk announced on Wednesday that the country will end government money flow to areas in the east controlled by pro-Russian separatists. 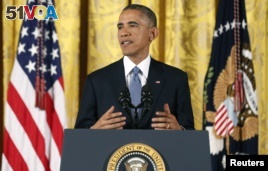 U.S. President Barack Obama holds a news conference in the East Room of the White House in Washington, Nov. 5, 2014.

Mr. Yatsenyuk said the restriction on Donetsk and Luhansk will continue as long as they are held by what he called "terrorists."

A delegation of West African leaders arrived Wednesday Burkina Faso to try to ease a political crisis there. It arose after the country's President Blaise Compaore resigned from office.

The presidents of Ghana, Nigeria and Senegal traveled to Ouagadougou to meet with Burkina Faso's temporary president Lieutenant Colonel Isaac Zida. The delegates also met with other political and religious leaders.

Burkina Faso's military took control of the country Friday after Mr. Compaore resigned and fled the country. He acted after a series of violent protests against an effort to constitutionally extend his rule.

The U.S. business magazine Forbes has again named Russian President Vladimir Putin the most powerful person in the world. He was the magazine's choice last year as well.

Forbes described Mr. Putin as "the undisputed, unpredictable and unaccountable head of an energy-rich, nuclear-tipped state, no one would ever call him weak."

broad – adj. large from one side to the other side

powerful – adj. having the ability to control or influence people or things

unaccountable – adj. not required to explain actions or decisions