Update Required To play the media you will need to either update your browser to a recent version or update your Flash plugin.
By VOA
23 March, 2015


Since the 1950s, American presidents have been going to Camp David in the mountains of Maryland, just outside Washington, D.C. They have traveled there to rest or hold meetings away from the noise of the city and the news media.

But President Barack Obama rarely goes to the camp. Now, at least one business is closing in nearby Thurmont, Maryland.

Over the years, world leaders have gathered at Camp David to meet with the U.S. president or for summits. The mountain hideaway is where differences between leaders or countries were worked out. For example, Camp David is where the peace treaty between Israel and Egypt was signed in 1979, during the presidency of Jimmy Carter. 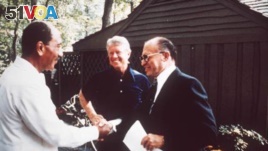 The summits and presidential holidays put the sleepy town of Thurmont on the world map. But President Obama has used Camp David less often than the presidents before him. He rarely holds summits there and does not visit often.

So now Thurmont’s Cozy Inn is preparing to close. Since 1929, the Cozy Inn has provided food and drink to generations of White House aides, international delegations and reporters.

Gerald Freeze is the owner of the landmark hotel.

"When you have the large summits of course you've got your name all over the paper and that attracted people to the area and you got more notoriety. With this president not being here and not having any large summits has certainly had some effects."

John Kinnaird is the mayor of Thurmont, Maryland. He grew up watching presidents drive up and down this road. He saw every president from Dwight Eisenhower to George W. Bush. But he says he never saw President Obama.

"Other presidents seemed to spend a lot of time at Camp David -- a lot of weekends. It's a great place, a great family place. They have all kinds of activities of up there. President Obama for some reason doesn't take advantage of it."

For pleasure, President Obama often travels to Hawaii or Chicago, Illinois. When Mr. Obama has come to Camp David, he usually travels by helicopter. He does not drive through the town.

This has led to a loss of business for places like the Cozy Inn. The inn was home to the bar where White House Press Secretaries, reporters and diplomats could go after work. Even Winston Churchill once had a beer and a hamburger there. 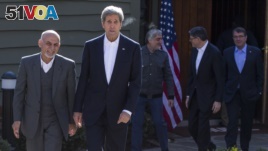 Secretary of State John Kerry walks with Afghanistan's President Ashraf Ghani before the start of a meeting at the Camp David Presidential retreat, March 23, 2015, in Camp David, Maryland.

On Monday, Secretary of State John Kerry met with Afghan leaders at Camp David. Gerald Freeze says he did not know about the meetings. Mr. Freeze is sorry he will not be able to serve officials or reporters who visit Camp David.

"Unfortunately, we won't be open. I hope they accomplish a lot. They have so much to get done to get everything in the world straightened out."

For years, the Cozy Inn provided a gathering place for officials and reporters to talk and have a meal. Its closing marks the end of an era. Now, the indirect role the Cozy Inn played in the search for world peace has come to an end as well.

summit - n. a meeting or series of meetings between the leaders of two or more governments

landmark – n. an object or structure on land that is easy to see and recognize

era – n. a period of time that is tied to a person or event