Obama: No ‘Quick Fixes’ in Fight against Islamic State

Update Required To play the media you will need to either update your browser to a recent version or update your Flash plugin.
By George Grow
17 October, 2014


Military leaders from more than 20 countries were in the United States this week for talks with President Barack Obama. They spoke about U.S.-led efforts to defeat the Islamic State militant group. The militants now control large parts of Iraq and Syria.

President Obama told the leaders that he was concerned about the gains of Islamic State forces in western Iraq and near the Syrian town of Kobani. But he did not suggest any changes to what he called "a long-term campaign" against the militants. He said the campaign would include "days of progress and periods of setback," but would not involve what he called "quick fixes."

Mr. Obama said the situation in Kobani shows the threat from Islamic State forces. He said the U.S.-led coalition is united on wearing down and destroying the militant group. But he noted the operation is "not simply a military campaign."

"This is not a classic army in which we defeat them on the battlefield and then they ultimately surrender. What we're also fighting is an ideological strain of extremism that has taken root in too many parts of the region."

Some critics have questioned the plan of action against the militants. Last Sunday, U.S. Senator John McCain noted the apparent success of Islamic State forces in battle. The United Nations reported on Monday that up to 180,000 thousand people fled fighting in western Iraq after militants captured the city of Hit.

The United States has intensified its bombing of Islamic State forces in Iraq and Syria. But observers are calling for consideration of ground troops to strengthen the campaign against the militants. 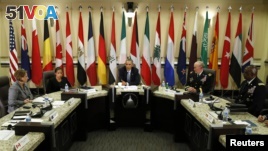 U.S. President Barack Obama speaks at a meeting with more than 20 foreign defense chiefs to discuss the campaign against Islamic State militants at Joint Base Andrews in Washington, Oct. 14, 2014. (REUTERS/Kevin Lamarque)

In recent weeks, Turkey has come under pressure to send its troops into northern Syria. Militants and Kurdish forces there are fighting for control of Kobani. The Kurdistan Workers' Party has called on Kurds to defend the town. But the group -- known as the PKK -- has battled the Turkish government for 30 years in its campaign for self-rule.

UN officials and Kurds have urged the government to permit creation of a safe area so that Kurdish volunteers can help those defending Kobani. But Turkey distrusts the PKK, and fears being pulled into the fighting. Earlier this week, Turkish aircraft attacked Kurdish rebel bases in Turkey. The Turkish military said the raids were meant to answer attacks on one of its bases.

Two other countries -- Saudi Arabia and the United Arab Emirates -- are active in military operations against the Islamic State. Saudi Arabia has long competed against Iran and its allies, including Syrian President Bashar Assad.

The U.S. government wants the Syrian leader to surrender power. It has accused him of using acts of terrorism against his own people. Both the United States and Saudi Arabia support Syrian rebel groups they describe as "moderate" -- in other words, they are opposed to Mr. Assad and the Islamic State.

Robert Blecher is with the International Crisis Group. He says the Syrian rebels are having trouble believing members of the coalition. The reason: coalition forces have been attacking Islamic State fighters with the approval of Syrian officials.

"That's their line, but it's awfully hard to hold up that argument when you have rebels on the ground who are saying, 'OK, if you want to support us, why aren't you going after the regime?'"

He warns that U.S. support for President Assad, whether real or not, could push the rebels away from the coalition.

For now, Saudi Arabia remains firm in its opposition to the Assad government. It says the first goal should be defeating the Islamic State.

This report was based partly on stories from VOA correspondent Aru Pande and reporters Jamie Dettmer and Dorian Jones. George Grow wrote it for Learning English. The editor was Mario Ritter. Christopher Cruise produced the program.

defeat – v. to cause to lose in a battle or struggle; n. a loss; the condition of having lost

militant – n. someone active in trying to cause political change, often by the use of force or violence

campaign – n. a connected series of military actions during a war

threat – n. a warning that one will do harm or cause damage