Obama Says He Is Eager to See Cuba

But only if he can meet with pro-democracy dissidents.

Obama told Yahoo News on Monday that part of a deal to visit Cuba must include the chance "to talk to everybody."

"I've made very clear in my conversations directly with President [Raul] Castro that we would continue to reach out to those who want...free expression inside of Cuba," the president said. 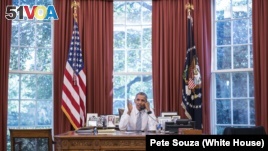 Obama said he hopes "sometime next year" he will see progress in Cuba's human rights record. Then a visit can be made to the Caribbean island nation.

A visit to Cuba will show Obama a different side of the island. When he took office, he vowed to close the U.S. military's prison at Guantanamo Bay. It holds 107 suspected terrorists. Not all were charged or convicted. Obama says he still intends to close the prison.

Congress is opposed to moving any of the Guantanamo inmates.

The last and only American president to visit Cuba while in office was Calvin Coolidge. Coolidge traveled there in January 1928.

VOA's News Division reported on this story. Jim Dresbach adapted it for Learning English. Kathleen Struck was the editor.

What do you think about President Obama visiting Cuba? We want to hear from you. Write to us in the Comments Section or visit our 51VOA.COM.

convicted - adj. being found guilty of a crime

inmate – n. a person who is kept in a prison