Update Required To play the media you will need to either update your browser to a recent version or update your Flash plugin.
By George Grow
10 November, 2014


President Barack Obama has told business leaders that the United States is "committed" to Asia. The president spoke at the Asia-Pacific Economic Cooperation forum meetings in Beijing. He arrived in the Chinese capital Monday morning.

Mr. Obama announced a new visa policy with China. Under the program, the two countries will increase the length of short-term tourist and business visas given to the other's citizens from one to 10 years. They will also extend the length of student and exchange visas from one to five years. The new policy will go into effect on November 12th.

President Obama also expressed support for American plans for a 12-nation "Trans-Pacific Partnership." Critics have questioned the proposal because it fails to include China and competes with Chinese plans for an Asian free trade area. 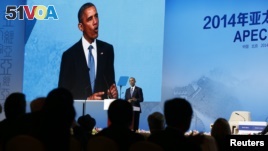 President Barack Obama speaks at the at the APEC CEO Summit in Beijing, November 10, 2014.

Also in Beijing, Chinese President Xi Jinping and Japanese Prime Minister Shinzo Abe have met for talks for the first time since they took office.

The discussions took place during the APEC meeting at the Great Hall of the People in Beijing.

The Japanese leader said his meeting with the Chinese president is the first step in improving relations between their countries.

Diplomats from Iran and western countries have opened a second day of talks in Oman about Iran's nuclear program. Iranian Foreign Minister Mohammad Javad Zarif is representing his country at the negotiations. Also in attendance are European Union foreign policy chief Catherine Ashton and American Secretary of State John Kerry.

More than 40 people have been killed in a suicide bombing at a school in northeastern Nigeria. Many of those killed were students.

The bomb exploded Monday at a town in the Nigerian state of Yobe. At the time, students were gathering for a morning meeting at a secondary school that specializes in science.

Medical workers say the bombing injured more than 70 people, many of them seriously. Witnesses say the bomber wore clothing like those worn by students.

No one has claimed responsibility for the attack. But some Nigerians suspect the militant group Boko Haram was responsible.

*This report was based on stories from VOA's News Division. George Grow wrote this story for VOA Learning English. Jeri Watson edited it.