Update Required To play the media you will need to either update your browser to a recent version or update your Flash plugin.
By George Grow
03 February, 2015


President Barack Obama sent his budget proposal to Congress on Monday. His budget calls for four trillion dollars in federal spending. Under the proposal, the United States would spend more than $50 billion on diplomatic and aid efforts around the world. That amount represents only about 10 percent of what has been suggested for the U.S. Department of Defense.

The amount of money for diplomacy and foreign aid in the budget proposal represents just one percent of the total budget. Heather Higginbottom is Deputy Secretary of State for Management and Resources. She says the government needs to make sure it has enough money to support America's leadership in the world.

"Our budget request reflects what is needed to ensure that the United States remains powerfully engaged on the myriad issues that directly impact the security, prosperity and values of the American people."

Most of the spending on U.S. diplomatic and aid efforts would be targeted at national security concerns, conflict prevention and other issues. They include international peacekeeping activities, security guarantees for U.S. allies and partners, and non-proliferation -- limiting the spread of nuclear and other weapons. 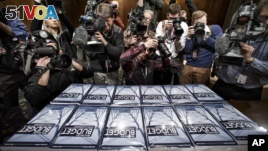 Under the budget proposal, the United States would invest one billion dollars in Central America. The Obama administration says the money would help fix the social, governance and economic issues that led to large numbers of children crossing the U.S. border illegally.

The administration wants Congress to approve $1.5 billion in assistance for Afghanistan. The budget request includes $3.5 billion to strengthen U.S. partners in the fight against the Islamic State militant group, also known as ISIL. It also includes $275 million to support an additional loan guarantee to Ukraine.

Heather Higginbottom says the president has asked Congress to approve another seven billion dollars for overseas contingency operations, also known as OCO. She says the money would be used to deal with immediate and unusual national security requirements.

"OCO funds will support critical programs and operations in Afghanistan, Pakistan and Iraq, as well as exceptional costs related to our efforts to fight ISIL, respond to the conflict in Syria, and support Ukraine.

She says the budget request represents a six percent increase over the request last year.

Jennifer Harris works with the Council on Foreign Relations, an independent organization. She says the State Department part of the budget comes in less than 10 percent of what the president requested for the Defense Department. She says she believes the foreign affairs spending budget is small when one considers the many threats in the world.

"It's not clear to me that the greatest challenges the U.S. faces in the world today are predominantly military in nature. And so to be putting 90 percent more dollars to more military hardware when it seems like an area where the U.S. already has hyper-dominance is not necessarily the best return on investment."

Four years ago, President Obama and Congress agreed on a series of required spending cuts over the coming years. But now, the president is asking Congress to cancel the cost-cutting measures. His administration says the spending limits have reduced economic growth and hurt the U.S. military.

President Obama has said the problems in Afghanistan, Syria, Iraq and other areas hit by violence cannot be fixed with military power alone.

Jennifer Harris warns that simply increasing State Department spending is not the answer. She says barriers within the government and difficult relations with Congress often created problems in the past.

"The flexibilities that go into these budgets in terms of how the State Department or Department of Defense is allowed to use this money as being as or more important than the sheer sums involved."

President Obama is expected to face opposition in a number of areas on his budget when Congress comes to vote on the numbers. The reason: the Republican Party now controls both the House of Representatives and the Senate.

This report was based on a report from VOA's Sharon Behn. George Grow wrote this story for VOA Learning English. Hai Do was the editor.

percent - n., a part of every hundred

security - n., freedom from danger or harm; protection; measures necessary to protect a person or place

conflict – n., a fight; a battle, especially a large one