U.S. President Barack Obama ended his East Africa trip Tuesday with a speech to the African Union. He spoke in Addis Ababa, Ethiopia.

Mr. Obama called for change, especially among Africa's many long-serving leaders. He said when leaders try to change the rules in order to stay in office it can lead to strife, noting the situation in Burundi.

The president also said Africa has changed from a poor and dependent continent to one of hope and progress.

European Union foreign policy chief Federica Mogherini is in Iran. She said she made the visit to begin working on the new nuclear agreement. 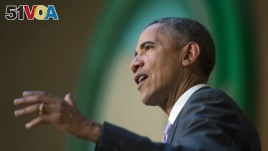 The EU foreign policy chief said she was would give the same message to all states in the area. She said the nuclear agreement is "a good one," and would build trust, confidence and cooperation.

North Korea's ambassador to China says his country is not interested in international negotiations about its nuclear program. He said Tuesday that North Korea's situation is "totally different" from that of Iran.

U.S. diplomat Sydney Seiler is in Beijing for meetings with Chinese officials. They are discussing ways to restart the nuclear talks with North Korea. He also discussed the issue with South Korean officials in Seoul during the last three days.

The lawyers for an Israeli spy said Tuesday that U.S. officials have decided to release him in November. 60-year-old Jonathan Pollard will have served 30 years of a life term.

The former U.S. government employee was arrested in November of 1985 when he sought asylum in Israel's embassy in Washington.

He was found guilty of passing military secrets to his Israeli agents. Israel apologized to the U.S. in 1987 for its part in the case. Years later it also admitted to paying Pollard for the information.

South Korea says the MERS outbreak in the country is over. Korean Prime Minister Hwang Kyo-ahn said Tuesday that no new cases have been reported for the past 23 days.

The Middle East Respiratory Syndrome killed 36 people since May. It infected 186 people and forced more than 16,000 others into quarantine.