Update Required To play the media you will need to either update your browser to a recent version or update your Flash plugin.
By Christopher Jones-Cruise
28 November, 2016


The death of former Cuban President Fidel Castro has produced a mix of reactions in the United States.

The death confirms sharp differences in the thinking of President Barack Obama and his replacement, President-elect Donald Trump.

It has also led to discussions about how the U.S. government will deal with Cuba when Trump becomes president in January. 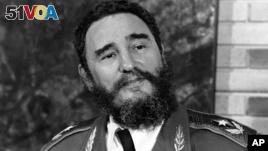 President Obama considers reestablishing ties with Cuba after more than 50 years of tensions one of his greatest foreign policy successes. Obama, who visited the country in March, became the first sitting U.S. president to do so since 1928.

Obama told the Cuban people: "I have come here to bury the last remnants of the Cold War in the Americas."

In September 2015, Trump supported Obama's decision to open up relations with Cuba. "I think it's fine," he told The Daily Caller website. "We should have made a better deal (but) the concept of opening with Cuba -- 50 years is enough."

However, during the election campaign, Trump began to strongly criticize the decision to normalize relations. Now, he is almost always critical of the move.

In a statement released soon after Castro's death last Friday, Obama said: "History will record and judge the enormous impact of this singular figure on the people and the world around him." He added that the United States offers "a hand of friendship to the Cuban people."

Some U.S. lawmakers immediately criticized the statement. Florida Senator Marco Rubio, a Republican, called it "pathetic." He noted that the statement did not talk about the thousands of people Castro killed and imprisoned. Rubio's parents lived in Cuba, and moved to the United States in the 1950s.

Another Republican, Texas Senator Ted Cruz, told ABC News that he hopes "we don't see any U.S. government officials going to Fidel Castro's funeral." Cruz's father was born in Cuba and now, like Rubio's parents, is a Cuban-American.

Trump released a statement after Castro's death. He called the former leader "a brutal dictator who oppressed his own people for nearly six decades." He blamed Castro for "firing squads, theft, unimaginable suffering, poverty, and the denial of fundamental human rights."

Trump promised that, as president, he will do all he can "to ensure the Cuban people can finally begin their journey toward prosperity and liberty."

It is not known how relations between the two countries will change when Trump takes office. Kellyanne Conway is a top aide to the president-elect. She told ABC News that Trump will demand that Cuba make changes.

Conway said the release of political prisoners would have an important effect on relations. She also said the president-elect is "absolutely" willing to change the Obama policy on Cuba.

Some lawmakers hope Castro's death will lead to improved relations between the two countries. Democratic Senator Amy Klobuchar of Minnesota and some Republicans support a bill that would end the 50-year-old ban on U.S. trade with Cuba.

VOA's Cindy Saine and Fern Robinson reported this story from Washington. Christopher Jones-Cruise adapted the reports for Learning English. He also used information from VOANews. George Grow was the editor.

sitting - adj. In this context, sitting means currently having a political office or job

remnant - n. the part of something that is left when the other parts are gone

concept - n. an idea of what something is or how it works

singular - adj. better or greater than what is usual or normal

funeral - n. a ceremony held for a dead person

firing squad - n. a group of soldiers whose job is to shoot a prisoner who has been sentenced to death

prosperity - n. the state of being successful -- usually by making a lot of money