Update Required To play the media you will need to either update your browser to a recent version or update your Flash plugin.
By Dan Friedell
16 August, 2017

Barack Obama was the first president of the United States to be active on social media.

It turns out, he tweets only a few times a month. 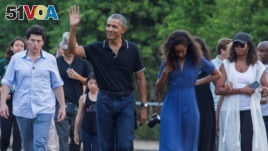 FILE - Former U.S. President Barack Obama waves while walking with his daughter Mali and his wife Michelle during a visit to the 9th-century Borobudur Temple in Magelang, Indonesia June 28, 2017. (REUTERS/Pius Erlangga)

After Donald Trump became president, Obama used Twitter to say some goodbyes and share memories from his eight years in the White House.

He wished everyone a happy Valentine's Day on February 14.

In March, he tweeted about International Women's Day, the death of singer Chuck Berry and a terrorist attack in London.

In May, he tweeted about the bomb that killed over 20 people after American singer Ariana Grande performed in Manchester, England.

In June, Obama wrote that of all the many things he has done, he was most proud to be the father of daughters Sasha and Malia. And he wished everyone a happy Father's Day.

Since then, he went on social media to write about health care, as the U.S. Senate debated the Affordable Care Act, known as Obamacare. And he wished Senator John McCain a speedy recovery after tests showed McCain has a form of brain cancer.

But it was Obama's tweet from last weekend that has received the most attention. In fact, it is now the most-liked tweet of all time, with over 3.3 million likes in just a few days.

Obama user Twitter to quote former South African president Nelson Mandela after deadly violence in the American city of Charlottesville, Virginia. His tweet came after a day in which white nationalists gathered to protest the city's decision to move the statue of a Civil War general. Other protesters also gathered to denounce the group. One woman was killed and more than 20 others injured when a man drove a car into the counter-protesters.

Obama wrote: "No one is born hating another person because of the color of his skin or his background or his religion. ..." The former president included a photograph of himself looking through a window at three children of different races.

The Mandela quote continued to two more tweets, but the first one got the most attention.

The tweet surpassed a tweet from Ariana Grande that expressed sympathy for those hurt by the bomb that exploded after her show.

By Wednesday morning, Obama's tweet was the fifth-most re-tweeted of all time, according to the website Favstar.fm.

Dan Friedell adapted this story for VOA Learning English based on information from VOANews and The Washington Post. George Grow was the editor.

Did you like or re-tweet Obama's tweet? We want to know. Write to us in the Comments Section or on 51VOA.COM.

goodbye – n. a message given before a person leaves

proud – adj. very pleased because of something you have done

surpass– v. to become lower in amount or worse in condition