Update Required To play the media you will need to either update your browser to a recent version or update your Flash plugin.
By Ashley Thompson
23 January, 2015

This weekend, President Barack Obama is set to make his second trip to India since taking office. The president will attend India's Republic Day celebrations on Monday. The event includes a military parade and a public showing of Indian weaponry. Experts say the parade may be symbolic of Mr. Obama's visit.

The American leader is to meet with Indian Prime Minister Narendra Modi. They are expected to discuss increasing defense and security ties between the two countries.

Defense and trade cooperation between the two has been increasing in recent years. In 2013, the United States overtook Russia as the largest arms supplier to India, which has spent billions of dollars to modernize its armed forces. India takes part in more joint military exercises with U.S. forces than any other country. 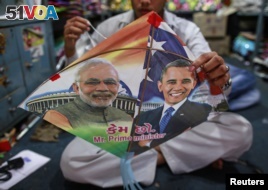 An employee ties threads on a kite, with portraits of Indian Prime Minister Narendra Modi (L) and U.S. President Barack Obama, ahead of Obama's visit, in Mumbai, Jan. 23, 2015.

Some observers say Mr. Modi wants to build an even stronger relationship with the United States. C. Raja Mohan works at the Observer Research Foundation in New Delhi. He expects the two sides to begin work on what he calls "a genuine strategic partnership" with far-reaching agreements.

"You have now a government here in Delhi that is prepared to walk the full distance with the U.S., and the U.S., too, I think, has sensed the new opportunity in India."

During Mr. Obama's visit, Indian and U.S. officials are expected to re-state support for a defense cooperation agreement that ends this June. They have also been working to finalize agreements that could lead to U.S. companies producing some military equipment in India.

The Indian government wants American companies to produce more weapons at home under what are known as technology transfer agreements. But that would not be easy. The United States has many rules on limiting movement of sensitive technology.

Bharat Karnad is a security expert at New Delhi's Center for Policy Research. He does not expect major outcomes from Mr. Obama's visit. He thinks India will not be satisfied with what the U.S. offers on technology transfers of military equipment.

"As I see it, it is going to be more platitudes, more instruments being created, more committees being set up, but nothing really there on the ground, in terms of both countries being satisfied with something substantive and hefty."

Experts say it will take time for the two countries to build trust in some areas. But they are moving closer because of security issues.

Chintamani Mahapatra is with New Delhi's Jawaharlal Nehru University. He says both sides are concerned about signs of a more aggressive China and possible unrest in Afghanistan after withdrawal of Western troops.

"Indians and Americans have been quarrelling over economic issues, IPR (intellectual property rights) issues, dumping issues, etc., etc., and, of course, on critical areas of foreign affairs, like Pakistan and Iran and China, the two countries do not agree 100 percent. But in matters of defense and security cooperation, there is hardly any dispute. The idea is to have a good, positive win-win balance of power in Asia."

During his first visit to India in 2010, President Obama told Indian lawmakers that the relationship between the two countries will be the "defining partnership of the 21st century." There is hope that this visit will re-energize that partnership.

And that's In The News from VOA Learning English. I'm Bob Doughty.

Words in this Story:

overtake – v. to move up to and past (someone or something that is in front of you) by moving faster

strategic – adj. relating to a general plan that is created to achieve a goal in war, politics, etc., usually over a long period of time

platitude – n. a statement that expresses an idea that is not new