Update Required To play the media you will need to either update your browser to a recent version or update your Flash plugin.
By Mario Ritter
26 May, 2016

The president spoke to reporters in the Japanese city of Ise Shima Thursday. He is in Japan for the meeting with other leaders of the G-7. It is a group of the seven largest industrialized nations: Japan, Canada, Germany, France, Italy, Britain and the U.S.

Obama said the world is paying close attention to the presidential election because "the United States is at the heart of the international order."

It is not the first time that the Democratic president has strongly criticized the Republican presidential candidate. 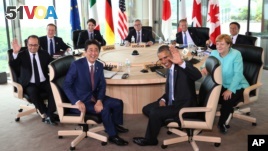 Trump, a businessman, has made a number of controversial statements about U.S. and foreign issues.

His comments caused a strong reaction in both countries.

When Trump announced his candidacy, he angered Mexico by saying that immigrants from the country are "bringing drugs. They're bringing crime. They're rapists." And he promised to build a wall to keep them out.

In addition, Trump has called for banning Muslims from entering the U.S.

On Thursday, Obama said his fellow leaders are, in his words, "not sure how seriously to take some of his pronouncements." He added that Trump's comments "display either ignorance of world affairs, or a cavalier attitude, or an interest in getting tweets and headlines."

Before Trump's primary election victories, Obama had said he does not believe he will be president. Obama has questioned the businessman's judgement on foreign issues.

Earlier this month, Obama referred to Trump's acting on television. He said, "This is not entertainment. This is not a reality show."

During a speech before graduating students at Rutgers University in New Jersey, Obama said, "In politics and in life, ignorance is not a virtue."

This brought a sharp reply from Trump. The businessman tweeted, "In politics, and in life, ignorance is not a virtue." This is a primary reason that President Obama is the worst president in U.S. history!

Traditionally, a sitting U.S. president does not generally comment on the presidential campaign that decides his successor.

Some observers say it gives the appearance of interference with the democratic process.

After the summit, Obama is to travel to the city of Hiroshima. The city is where U.S. a warplane dropped the first atomic bomb in 1945. Tens of thousands of civilians died in the blast. Obama will be the first U.S. president to visit the site.

Richard Green reported this story for VOA News. Mario Ritter adapted it for Learning English. Hai Do was the editor.

rattle – v. to upset, to disturb

cavalier – adj. not showing concern for something important or serious