‘Off Grid’ Living No Longer Means Far Away from Others

Update Required To play the media you will need to either update your browser to a recent version or update your Flash plugin.
By Dan Friedell
19 June 2022


"Off-grid" or "off-the-grid" is a term for living away from public power and water supplies.

In the past, that often meant trying to survive or live on land far away from others. Some old television programs made that kind of life look fun to some people. Today, however, only a very small number of people who live "off-grid" do that. In fact, many live less than an hour from any town.

Gary Collins has mostly lived "off-grid" for the last 10 years. He has written books about it and leads classes on the internet. 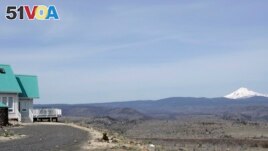 Collins told The Associated Press: "Living off-grid doesn't mean you don't buy your groceries at a store or take your waste to the local dump. It just means you are not connected to utility grids."

Utility grid describes the network that produces and supplies electricity, energy and water to people in a large area.

Collins estimates that only 1 percent of those living off-grid live far away from people and supplies. Overall, the off-grid population is very small.

Because of the COVID-19 pandemic, people from the city started to think about changing their way of life and living in distant areas. These days, the move is easier because of gains in renewable power and energy storage.

Sheri Koones also writes about off-grid living. Her book is called Prefabulous and Almost Off the Grid.

"There's a lot more interest in living off the grid now because energy is costing so much and there are so many problems with grids," Koones said.

She mentioned that some people are connected to the grid but try to power their homes with solar panels. When the sun produces more power than they can use, people send it to the power company in return for a small payment.

One example is called "dry camping" in large vehicles with room for sleeping. These recreational vehicles, or RVs, do not have connections to electricity or water. Others live off-grid in costly homes in California cities like Santa Barbara. And some live in small cabins far away from other people.

Jon Bang works for Anacapa Architecture which builds off-grid homes in Santa Barbara and in Portland, Oregon. He said more people are interested in off-grid living in the last two years. "There's a desire to get more in tune with nature," Bang said.

The Anacapa homes are costly to build. They use new technology to take the sun's energy, store power in batteries and use very little water for bathing or treating human waste. The materials need to be transported far away from usual home building areas. Some are built into the sides of hills with tops that can be used to grow food.

Bang says for people with money, off-grid living means "a quieter kind of life, grounded in nature without neighbors nearby."

For those who do not have much money, Collins warns off-grid life may not be easy. "If you learned everything you know on YouTube, you are never going to survive."

Collins said growing up poor in a rural part of the U.S. helped him succeed at living off-grid today. He knows how to hunt, grow some of his own food and get water from a well.

He said people who want to live far away from others must be prepared to do some work. "Your wood won't cut itself. You'll have to haul water," Collins said.

He also warned that living off-grid means being far away from help in case of a medical emergency. "People die off-grid all the time," he said, because of accidents from activities like cutting wood.

Collins noted that life off-grid may not be as good for the environment as people think. People use a lot of fuel driving a truck or running a gas-powered generator.

But, experts say, modern technology makes off-grid living easier for people who do not want to read books by candlelight or haul water from a well like those who did it hundreds of years ago.

Write to us in the Comments Section and visit 51VOA.COM

dump– n. a place where waste is taken and left

solar panel– n. a large, flat piece of equipment that uses the sun's light or heat to create electricity

camp– v. to live outside and away from home in a place usually far away from cities, sometimes using a moveable shelter called a tent

haul– v. to carry something heavy

generator– n. something, usually an engine, that runs on gas and crates power