Update Required To play the media you will need to either update your browser to a recent version or update your Flash plugin.
By Dan Friedell
23 March 2021


Have you ever thrown a camel?

Camels are large and heavy animals, so it would be hard to do. 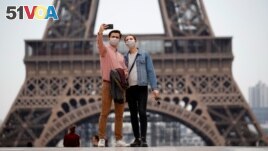 People take a selfie in front of the Eiffel Tower in 2020. A new French dictionary came out, supporting the way the language is spoken outside of France for the first time. (REUTERS/Gonzalo Fuentes)

But in the French-speaking Democratic Republic of the Congo, "to throw a camel" is a way of saying "to make a spelling mistake."

Here's how the phrase sounds in French.

In the past, a phrase like that was not accepted by the French government as an official French term.

But recently, the French Ministry of Culture worked on a new kind of dictionary that accepts the idea that many people outside of France speak the language. The language has changed over time and is different in places like Ivory Coast in West Africa or Quebec in Canada, compared to how it is in Paris.

A new online dictionary, called the French speakers' dictionary, includes new French words from around the world. It was released on March 18 – just in time for International French Speaker's Day on March 20.

The new dictionary includes unofficial words like "pourriel," which means an unwanted email if you are in Canada. It is a word based on "courriel," which just means an email.

French President Emmanuel Macron proposed the idea of the dictionary in 2018. It now contains about 600,000 terms.

Roselyne Bachelot is the French Culture Minister. She said the dictionary is not just for France's 67 million citizens, but for the 300 million French speakers worldwide.

The aim, supporters say, is to recognize the way language changes. Words and expressions included in the dictionary come from over 50 countries – even from the United States. Some people in the southern U.S. state of Louisiana speak French.

People can see the dictionary on a website or with an app. Users can also send in new words they think should be included.

Official dictionaries produced by the French Academy in Paris were first published hundreds of years ago and are regularly updated.

New words in the online dictionary will be scientifically studied by a group of experts. The crowdsourced information website, Wikipedia, is said to have served as a model.

The internet dictionary, however, has a new part you cannot find in a book. If you live in Senegal, for example, you can search the dictionary, and it will give you the definition of a word based on its use in that country.

Introducing the project in 2018, Macron said France needed to understand that it did "not carry the destiny of the French language on its own." He added that France is "a country among others" that learns, speaks and writes in French.

Louise Mushikiwabo is from Rwanda. She heads an international French-speaking organization. She proposed this word:

In her country, it is used to describe the process of solving problems using limited resources.

VOA's Lisa Bryant spoke with some people in Paris who speak French but are not from France. They liked the idea of the new dictionary.

Nicole Sika is from Ivory Coast. She suggested two words should be added: "Go" which means a female friend, and "zo" which describes someone who is well-dressed.

Other French dictionaries are changing, too. But this is the first time a dictionary supported by the French government has included words that are not often used in France.

"The French no longer have a monopoly on French," the French magazine L'Express wrote recently, "and that is good news."

Lisa Bryant wrote this story for VOA. Dan Friedell adapted it for Learning English. Mario Ritter, Jr. was the editor.

Do you speak French? What are some words you would like to see in the new French dictionary? Tell us in the Comments Section and visit 51VOA.COM.

spell –v. to say, write or print the letters of a word

phrase –n. a group of two or more words that express a single idea but do not usually form a complete sentence

app –n. a program that runs on a computer or mobile phone that performs a special function

crowd-source –v. to get information by asking a large group of people for a response

destiny –n. what will happen in the future; the thing that someone or something will experience in the future

monopoly –n. complete ownership or control of something