Update Required To play the media you will need to either update your browser to a recent version or update your Flash plugin.
By Bryan Lynn
17 January, 2017

Transport ministers from Malaysia, Australia and China announced Tuesday the search had officially been suspended.

The Boeing 777 plane disappeared March 8, 2014 while carrying 239 people from Kuala Lumpur, Malaysia to Beijing, China. The plane lost voice contact with officials on the ground less than an hour after takeoff and did not send any emergency messages.

More than half the plane's passengers were Chinese. 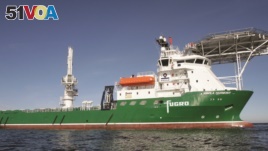 In a statement, the ministers said that even with the best technology and search techniques available, the aircraft had not been found. The underwater search had been focused on a 120,000 square kilometer area in the southern Indian Ocean.

Investigators became hopeful in July 2015, when a piece of the plane's wing was found in the Indian Ocean east of Madagascar. The Associated Press reported that since then, more than 20 objects - either confirmed or believed to be from the plane - have washed up on beaches throughout the Indian Ocean.

"The decision to suspend the underwater search has not been taken lightly nor without sadness," the statement said.

The ministers thanked all nations that provided equipment, expertise and assistance. More than $150 million was spent on the search efforts by Malaysia, Australia and China. The ministers said they "remain hopeful" that new information may be found in the future to help locate the missing wreckage.

As the search for MH370 ended, new technology has been launched to help prevent planes from ever going missing.

On Saturday, a group of satellites were successfully deployed with technology that experts say will be able to track airplanes over the entire earth.

A Falcon 9 rocket from American aerospace company SpaceX carried 10 satellites into orbit for telecommunications company Iridium. The launch from California marked a successful return to rocket launches for SpaceX after an explosion on its launch pad last September.

Iridium's partner Aireon will use the satellites to track aircraft, instead of current methods using ground radar and other monitoring tools.

"This successful first launch brings us one step closer to changing the way the world flies by enabling the ability to track aircraft anywhere on the planet," Aireon CEO Don Thoma said.

Currently, about 70 percent of the world's airspace lacks real-time surveillance because of rough terrain, deserts or oceans. The new satellite technology is expected to also make airplanes trackable in those so-called black zones.

Aireon has said its global satellite-based system will be deployed by 2018 to track and monitor aircraft around the world in real-time.

Bryan Lynn wrote this story for VOA Learning English, with additional material from reports from VOA's Carolyn Presutti and the Associated Press. Hai Do was the editor.

We want to hear from you. Do you think it was the right decision to end the search for the missing Malaysian airliner? Write to us in the Comments section, and visit 51VOA.COM.

wing – n. one of usually two long, flat parts of an airplane that extend from the sides, making it possible to fly

enable – v. to make something able to do or accomplish