Update Required To play the media you will need to either update your browser to a recent version or update your Flash plugin.
By VOA
02 October, 2014


U.S. health officials say as many as 100 people may have had contact with an Ebola patient in Texas. Liberian national Thomas Eric Duncan is the first person to be identified with the virus in the United States. He arrived in Texas from Liberia two weeks ago.

Officials in Dallas, Texas say 12 to 18 people had direct contact with Mr. Duncan. The officials also say they have ordered a family with whom the man stayed to remain in their home as a safety measure. No one has shown signs of infection, the officials say.

Officials say the U.S. healthcare system is fully prepared to contain a spread of Ebola in the country. There have been more than 7,100 cases of Ebola reported in West Africa. More than 3,300 people have died of the disease. 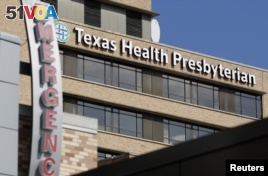 Texas Health Presbyterian Hospital in Dallas is treating a man infected with Ebola.

Hong Kong's chief executive Leung Chun-ying has offered to hold talks with pro-democracy student protesters. But he said he will not accept their call for him to resign.

Mr. Leung spoke at a news conference late Thursday night. He said he is going to send his chief secretary, Carrie Lam, to meet with protesters to discuss "constitutional developments."

Ms. Lam said she would contact to the Hong Kong Federation of Students, which requested the meeting as soon as possible.

Student protesters had threatened to occupy government buildings if Mr. Leung did not resign by the end of Thursday.

Putin Says He Hopes Election Will Bring Security to Ukraine

Russian President Vladimir Putin said on Thursday he hoped Ukraine's parliamentary election would help secure the country. The voting is set for October 26.

Mr. Putin said that Russia would welcome stability in Ukraine.

He spoke to a gathering of investors in Moscow. He said the ending of the political and economic crisis in Ukraine is in Russia's national interest. Mr. Putin also called Ukraine Russia's "most brotherly" nation.

contact – n. the act of touching or being close to a person or thing

prepare – v. to make ready; to put together

hope – v. to expect; to believe there is a good chance that something will happen as wanted; to want something to happen