Officials Consider How to Treat a Child Who Shot His Teacher

Update Required To play the media you will need to either update your browser to a recent version or update your Flash plugin.
By Hai Do
10 January 2023


A six-year-old student shot his teacher in a classroom in the American state of Virginia last week.

Police Chief Steve Drew of Newport News, Virginia told reporters Monday that there was no fight, no physical struggle, and no warning.

"What we know today is that she was providing instruction. He displayed a firearm; he pointed it, and he fired one round," Drew said. 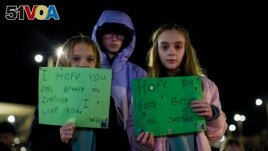 The police chief said the teacher, 25-year-old Abby Zwerner, put her hand up to defend herself. The bullet went through her hand and into her upper chest. Her injuries were first thought to be life-threatening. But her condition has since improved and she is in stable condition at a hospital.

Drew also said that the boy used a 9mm handgun in the shooting. The gun was legally purchased by his mother and was in the family's home. He said the boy brought it to school in his backpack the day of the shooting.

Drew praised Zwerner for quickly moving her students out of the classroom after she was shot. He said a recorded video at the school shows she was the last person to leave her classroom. Drew said: "She turned around [to] make sure every one of those students was safe."

A school employee went into the classroom and restrained the boy after hearing the gunshot. Drew said the boy became "a little combative" and struck the employee.

Police officers then arrived and brought him to a medical center under an emergency legal action. A judge will decide what the next steps are for the boy. Police have also talked with the boy's mother. It is unclear whether she could face any charges.

As questions remained about the boy and his mother, a crowd gathered Monday night in Newport News to show support for the teacher.

Lauren Palladini works with Zwerner at Richneck Elementary School. She told the crowd that Zwerner is "sweet. She's thoughtful. She's caring. And she's been one of the most amazing teachers that I've been blessed to interact with."

Amanda Bartley, who teaches at another elementary school in Newport News, asked everyone to pray for Zwerner and to "pray for the young man who did this."

Bartley told The Associated Press that many questions remain unanswered. Among them: "How did he get the gun? Why wasn't it locked up? A good gun owner knows that you lock up your weapon. You have a safety on. You keep the ammunition separate from the weapon itself."

Gun owners can be charged under a Virginia law for leaving a loaded, unsecured gun that could harm or injure children under the age of 14. However, the state does not have laws giving details on how an unattended gun should be stored or requiring gun owners to lock up their weapons.

Allison Anderman is the director of local policy at Giffords Law Center to Prevent Gun Violence, a non-profit group. She said, "Virginia definitely has a weaker law than many other states that have child access prevention laws."

Legal experts said it is possible under Virginia law to criminally charge a 6-year-old child. But they believe it is highly unlikely that any government lawyer would even try.

To be tried as an adult in Virginia, a person must be at least 14. In addition, common law in the U.S. known as the "infancy defense" holds that children under seven cannot be charged with a crime. The belief is that they are so young that they cannot form criminal intent.

A judge would also have to find that a six-year-old could understand the legal action against him and assist in his own defense, said Andrew Block. He is a professor at the University of Virginia School of Law who was the director of Virginia's Department of Juvenile Justice from 2014 to 2019.

"It's virtually impossible to imagine a 6-year-old being found competent to stand trial," Block said.

Julie E. McConnell, a law professor at the University of Richmond in Virginia, has worked on youth legal cases for more than 25 years. She said government lawyers can appeal in cases that affect the child's well-being and physical safety.

A judge could then order services to deal with the child's behavior or parent's cooperation in treatment. The judge could also send a child to live with a relative, a child welfare agency, or a local social services agency.

stable –adj. not getting or likely to get worse (especially related to medical condition)

backpack –n. a bag or container carried on the back

lock up –v. (phrasal) to secure using a device like a lock

access –n. to ability to get or use something

competent –adj. able to do or undergo something