Update Required To play the media you will need to either update your browser to a recent version or update your Flash plugin.
By John Russell
04 November 2022


Scientists say the Earth's temperature has risen by about 1.1 degrees Celsius since the modern industrial period began.

And they warn that the effects of rising temperatures will get worse with every increase of one tenth of a degree. 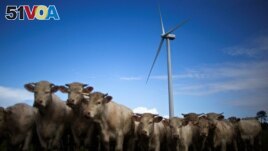 In a 2021 report, the Paris-based International Energy Agency (IEA) said there can be no new investments in fossil fuels if officials want to reach their temperature goal.

The most recent report by the United Nations' Intergovernmental Panel for Climate Change called for "immediate and deep" cuts to fossil fuels. U.N. Secretary-General Antonio Guterres spoke about those goals at the 2021 climate conference in Glasgow, Scotland, known as COP26. He said, "Our addiction to fossil fuels is pushing humanity to the brink."

Addiction is a strong and harmful need to do something or have something.

The world depends on fossil fuels for much of its electricity, heating and transportation. Fossil fuels are also important for agriculture and industry. But officials say that cleaner, renewable energy sources — such as solar and wind energy — will replace much of that demand.

Elizabeth Robinson is with the Grantham Research Institute on Climate Change and the Environment. She said that many places are using renewable energy, "but emissions are continuing to rise."

While renewable energy works for electricity production, other industries — such as cement-making, steel and shipping — depend on fossil fuels.

That is why experts are studying technologies that might be used in some industries. Some have suggested using "green fuels," such as ones made out of plant materials or natural waste, known as biofuels.

Two newer technologies being explored include carbon capture, which takes carbon dioxide out of the air, and green hydrogen, which uses renewable energy to make hydrogen. But, these technologies are costly and untested on a large scale.

Some scientists say methane, another carbon gas that traps heat, must be greatly reduced. Methane is about 25 times more effective at trapping heat than carbon dioxide. Once released, scientists estimate it stays in the atmosphere for about 12 years.

Many countries at the COP26 meeting in Glasgow last year promised to stop methane leaks from oil wells and gas pipelines. Scientists say such methane reductions would have immediate effects on slowing the warming of the atmosphere.

Robinson said there are two areas in which action could slow the warming of the atmosphere: stopping deforestation and reducing the eating of animals. Forests naturally take in carbon dioxide from the atmosphere. When forests are cut for agriculture, especially for animals that need large amounts of land, more greenhouse gases are released into the air.

Robinson added that these ideas represent "a very controversial area." But, she added, "in most higher income countries, most people eat far more meat than they need to."

Dana Beltaji reported on this story for the Associated Press. John Russell adapted it for VOA Learning English.

brink –n. : the edge at the top of a steep cliff — usually used figuratively to refer to a point that is very close to the occurrence of something very bad

emission –n. (often pl.) something that is released such as a gas into the atmosphere