Malaysia Airlines Flight 370 has been missing for more than 13 months. The airplane, a Boeing 777, was carrying 239 people on a flight between Malaysia and China. The plane disappeared over the Indian Ocean on March 8, 2014.

Months of air, sea and underwater searchers have yet to find any evidence of the aircraft. Officials involved in the investigation have been considering what to do next if nothing is found in the current area of exploration. 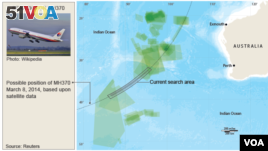 This week, three countries announced plans to double the search area if no evidence of Flight 370 is found soon. The announcement followed a joint meeting of Malaysian, Chinese and Australian officials in Kuala Lumpur.

Malaysia's Transport Minister, Liow Tiong Lai, spoke to reporters after the talks on Thursday. He said an expanded search will start to the north of the current search area in the Indian Ocean, off the western coast of Australia.

Looking for wreckage in that extended area could take a year. Since last March, crews have explored more than 60 percent of the current search area. The Malaysian, Chinese and Australian officials continue to express hope that the aircraft will be found in those waters. That is where experts have said Flight 370 most likely went down.

Warren Truss is Australia's deputy prime minister. He says crews are using some of the best equipment in the world to look for the plane. Mr. Truss describes the underwater search area as very challenging or difficult. He notes the search area is a five- to six-day trip from the closest port.

Two-thirds of Flight 370's passengers are Chinese nationals. Yang Chuangtang is China's Transportation Minister. He noted his government's desire to discover exactly what happened to the passengers and crew.

In his words, "No matter the challenges that will be confronted, China will stand alongside friends Australia and Malaysia to continue the search until the aircraft is found, and the mystery of this unprecedented tragedy in the aviation industry is solved."

The ministers refused to answer reporters' questions about how much the additional search would cost.

Malaysia Airlines Flight 370 began in Kuala Lumpur, and was to have ended in Beijing. But the plane failed to follow its expected flight path, and then disappeared from radar.

Some observers think the aircraft may have been placed on a different flight path by its pilot. Investigators believe the plane traveled thousands of kilometers before using up all its fuel and falling into deep, distant waters.

And that's In The News from VOA Learning English. I'm Mario Ritter.

This report was based on a story from VOA Correspondent Steve Herman in Bangkok, Thailand. George Grow wrote it for Learning English. Mario Ritter was the editor.

disappear(ed) – v. to become unseen; to no longer exist

double – v. to increase two times as much in size, strength or number

wreckage – n. what remains of something severely damaged or destroyed