US Blames Iran for Attack on Tankers in Gulf of Oman

Update Required To play the media you will need to either update your browser to a recent version or update your Flash plugin.
By Hai Do
13 June, 2019


American Secretary of State Mike Pompeo says Iran "is responsible for the attacks" on two oil tankers in the Gulf of Oman earlier Thursday.

Pompeo said the United States made the judgement "based on intelligence, the weapons used, the level of expertise needed to execute the operation, and recent similar Iranian attacks on shipping." He added that no other group "operating in the area has the resources and proficiency to act with such a high degree of sophistication."

Pompeo also said the U.S. would defend its forces and interests in the area but gave no details on any immediate plans. 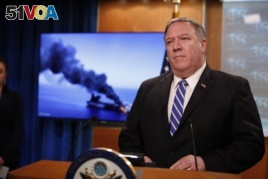 In May, the U.S. sent an aircraft carrier battle group to the Persian Gulf in response to, what it said, were threats from Iran. The U.S. had accused Iran of using mines to attack four oil tankers near the port of Fujairah in the United Arab Emirates. Iran has denied any involvement.

However, Iran has repeatedly said it would block the Strait of Hormuz, near where the attacks happened, if it cannot sell its oil because of U.S. sanctions. About one third of the world's oil trade passes through the strait. News of the attack caused the price of oil to jump as much as 4%.

Iran has also warned that it is ready to break the 2015 nuclear deal with world powers that the Trump administration withdrew from last year. Under the deal reached with China, Russia, France, Germany, Britain and the U.S., Iran had agreed to limit its enrichment of uranium in exchange for the lifting of economic sanctions.

The latest attacks happened as Japan's Prime Minister Shinzo Abe was meeting with Iranian leaders in an attempt to lower tensions in the area. Iran's leader Ayatollah Ali Khamenei warned after the meeting that, while it does not seek nuclear weapons, "America could not do anything" to stop Iran if it did.

The attack took place one day after Iran-supported Houthi rebels in Yemen fired a missile at an airport in Saudi Arabia, injuring 26 people. The Houthis had also claimed an armed drone strike last month on Saudi oil pumping stations.

Saudi Arabia, which is fighting the Houthis, called Thursday's attack a "major escalation." Russia, one of Iran's main allies, urged caution, saying no one should rush to judgement about the attack or use it to put pressure on Tehran.

Iranian state television said 44 sailors from the two tankers were rescued by other ships in the area. They were then brought to an Iranian port in the southern area of Hormozgan.

Hai Do wrote this story for VOA Learning English with additional reports from Reuters and AP. Mario Ritter Jr. was the editor.

proficiency –n. the ability to do something well

sophistication –n. having a lot of experience and knowledge about a subject such as technology or art

tanker - n. ship that is designed to carry liquid, like oil

drone - n. small aircraft that flies without a pilot

enrichment - n. process of increasing natural uranium for nuclear use

sanction - n. action taken to force a country to obey international laws by limiting or stopping trade with that country