Update Required To play the media you will need to either update your browser to a recent version or update your Flash plugin.
By Shelley Gollust
18 July, 2015

Millions of people all over the world use the word okay. In fact, some people say the word is used more often than any other word in the world.

It may be common, but no one can seem to agree on how the "OK" came to be. Faith Lapidus tells us more. 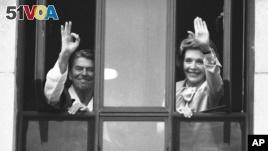 In this 1985 file photo, President Ronald Reagan gives the A OK sign from the window of his hospital room at the Naval Medical Center in Bethesda, Maryland as first lady Nancy Reagan waves to a small group below. The president is recovering from surgery performed Saturday to remove a cancerous polyp. (AP Photo/Scott Stewart)

Okay means "all right" or "acceptable." It expresses agreement or approval. You might ask your brother, "Is it okay if I borrow your car?" Or if someone asks you to do something, you might say, "Okay, I will." Still, language experts do not agree about where the word came from.

Some people say it came from the Native American Indian tribe known as the Choctaw. The Choctaw word "okeh" means the same as the American word okay. Experts say early explorers in the American West spoke the Choctaw language in the nineteenth century. The language spread across the country.

But many people dispute this.

Language expert Allen Walker Read wrote about the word okay in reports published in the 1960s. He said the word began being used in the 1830s. It was a short way of writing a different spelling of the words "all correct." Some foreign-born people wrote "all correct" as "o-l-l k-o-r-r-e-c-t," and used the letters O.K.

Other people say a railroad worker named Obadiah Kelly invented the word long ago. They said he put the first letters of his names -- O and K -- on each object people gave him to send on the train.

Not everyone agrees with this explanation, either. But experts do agree that the word is purely American. And it has spread to almost every country on Earth.

Then there is the expression A-Okay. This means everything is fine. A-Okay is a space-age expression. It was used in 1961 during the flight of astronaut Alan Shepard. He was the first American to be launched into space. His flight ended when his spacecraft landed in the ocean, as planned. Shepard reported: "Everything is A-Okay."

However, some experts say the expression did not begin with the space age. One story says it was first used during the early days of the telephone to tell an operator that a message had been received.

There are also funny ways to say okay. Some people say okey-dokey or okey-doke. These expressions were first used in the 1930s. Today, a character on the American television series, "The Simpsons," says it another way. He says okely-dokely.

Thanks, Faith. This program was written by Shelley Gollust.

If you thought this Words and Their Stories was okay, you can find more at our website at 51voa.com.