Update Required To play the media you will need to either update your browser to a recent version or update your Flash plugin.
By Dan Friedell
25 January 2021


Animal biologists in the U.S. state of Wyoming recently confirmed the death of the oldest-known grizzly bear in Yellowstone National Park.

Grizzly is another name for the North American brown bear. This bear was 34 years old. Most male bears do not live that long. But he outlived the oldest-known female bears. He was known to park biologists as Grizzly 168.

He was first captured and given a tattoo with his number in 1989. Officials made the decision to give the bear a lethal injection because of his poor health. The bear had lost a lot of weight and was killing young farm animals. Healthy male bears weigh about 200 kilograms. This bear only weighed 77 kilograms. 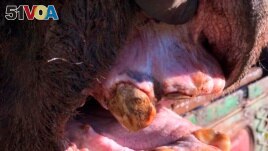 Grizzly 168 was so old, it only had three remaining teeth. (Zach Turnbull/Wyoming Game and Fish Department)

The U.S. Fish and Wildlife Service says healthy grizzly bears will sometimes chase and kill young animals for food. They also eat berries, roots, insects and fish. This old bear, however, was not able to eat much. He was so old that he had lost most of his teeth.

Recently, the bear would attack young cows. The bear would crush them with his jaws but would not leave any bite marks.

Officials said it was a hard decision to kill the bear because there are so few. Hundreds of years ago, there were lots of grizzly bears in North America. But as land was developed, many bears were killed.

The Fish and Wildlife Service declared them threatened in 1975 when there were very few known bears in the United States. Most of them were in Alaska. Now they are protected and the population is increasing. There are still, however, only a little more than 1,000 grizzly bears in the U.S. outside of Alaska.

Grizzly 168 leaves an important legacy. He did his part to help the population of bears recover. In his lifetime, researchers estimate he fathered at least three groups of baby bears.

The Associated Press wrote this story. Dan Friedell adapted it for Learning English. Mario Ritter, Jr. was the editor.

tattoo- n. a picture, word, etc., that is drawn on a person's skin by using a needle and ink

lethal- adj. causing or able to cause death

jaws- n. either one of the two bones of the face where teeth grow

legacy- n. something (such as property or money) that is received from someone who has died