Update Required To play the media you will need to either update your browser to a recent version or update your Flash plugin.
By Hai Do
01 April 2022


A 19-year-old girl and a 95-year-old man will be among the top singers to watch for at this weekend's Grammy Awards.

The 64th Grammy Awards will be held this Sunday, April 3, in Las Vegas, Nevada, to honor singers, songwriters and everything music for the year.

Olivia Rodrigo, the teen singer, is nominated in the top four areas - album, song and record of the year and best new artist - the music industry's highest honors. 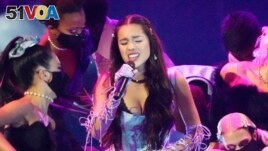 Only two musicians in Grammys history have won all four categories in the same year. Billie Eilish, at the age of 18, won all four at the 2020 Grammy Awards. And rock singer Christopher Cross did the same in 1981.

Music experts say Rodgrigo is favored to win best new artist after her song, Drivers License, took off in January 2021. She is also a strong possibility to win record and song of the year.

"Everybody thinks Olivia Rodrigo is going to take a significant number of awards," said Variety music expert Jem Aswad. "She's almost a shoo-in for best new artist." In other words, she is expected to win the best new artist.

For album of the year, Rodrigo's Sour is competing against 95-year-old Tony Bennett and Lady Gaga's Love for Sale. Other possible winners include albums from Justin Bieber, Taylor Swift, Jon Batiste, Billie Eilish and several others.

Kayne West, who has legally changed his name to Ye, is also nominated for his album Donda. Several media organizations, however, reported that West could not perform at this year's ceremony because of his recent social media posts.

West, or Ye, was suspended from Instagram for 24 hours this month after his posts about Trevor Noah, who will be hosting the Grammys this year.

Representatives for the Recording Academy, which presents the Grammys, and West did not respond to requests for comment.

West is an award nominee, so he could be at the event even if he does not perform. At the MTV Video Music Awards in 2009, West took the microphone from Taylor Swift as she was accepting an award.

"No one expects Kanye West to sit on his hands on Grammy night," Aswad said.

The Korean group BTS, which has yet to win a Grammy, is nominated for best pop/duo/group performance with Butter. Last year, the group lost to Lady Gaga and Ariana Grande's Rain on Me. This year, the boy's band is up against Tony Bennett and Lady Gaga's I Get a Kick Out of You.

This year's Grammys were moved to April from January because of a COVID-19 surge at the beginning of the year.

Hai Do adapted this story for Learning English based on reporting from Reuters.

teen - n. someone between the age of thirteen and nineteen

shoo-in - n. someone or something that is certain to win

microphone - n. a device into which people speak or sing to record or to make the sound louder