Update Required To play the media you will need to either update your browser to a recent version or update your Flash plugin.
By Ashley Thompson
12 February, 2018


Simone Biles has won more World Championship and Olympic medals than any other American gymnast in history.

She won four golds at the 2016 Summer Olympics. She wrote a book about her life, which was recently turned into a movie.

But one thing Biles does not have is a college education.

That will soon change.

Biles had planned to go to the University of California Los Angeles after competing at the 2016 Olympics. But her very busy life made studying full-time at a university nearly impossible.

Instead, she has started taking classes at the University of the People, a nonprofit, online university. She is working toward a bachelor's degree in business administration.

Biles, who is 20 years old, has also become the university's global ambassador. 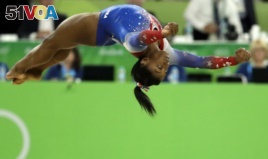 Shai Reshef, an Israeli-born businessman, set up the University of the People in 2009. The school offers undergraduate and graduate level degree programs. Students are not required to pay to take the university's classes. The cost is free, because of private and public donations.

More than 6,000 educators and administrators from schools such as Yale University and New York University volunteer their time and expertise.

While there are no tuition costs, students must pay $100 for each exam they take. The university estimates that getting a bachelor's degree costs about $4,060.

The school's nontraditional methods work well for Biles, whose life so far has been anything but normal.

"I haven't had a traditional school experience for a while, actually going into a classroom and sitting down...and the traditional way won't work for me and I understand that. So it's okay. Online it is!"

Biles was home-schooled during her high school years to make more time for her gymnastics training.

Biles spoke with VOA and other media about her involvement at University of the People. She also spoke about the USA Gymnastics sex abuse scandal involving former team doctor Larry Nassar. Biles has said she is among the more than 250 women and girls that he abused.

Biles says she hopes that once she returns to competition, people will talk about her abilities as a gymnast, and not her connection to Nassar's abuse.

"I didn't want the headlines, once I go out and compete again, to be -- you know -- that be the title of me, rather than what I have to offer for this sport."

Biles says the same drive and hard work that shaped her gymnastics career will help her in her studies as well.

bachelor's degree - n. a degree that is given to a student by a college or university usually after four years of study

undergraduate - adj. of or relating to a course of studies at a college or university that leads to a bachelor's degree

graduate - adj. of or relating to a course of studies taken at a college or university after earning a bachelor's degree or other first degree

foster - adj. used to describe a situation in which for a period of time a child lives with and is cared for by people who are not the child's parents