Olympic Skiers Worry About Snow Made by Machines

Update Required To play the media you will need to either update your browser to a recent version or update your Flash plugin.
By Dan Friedell
17 January 2022


Olympic skiers have said they are worried about competing safely at the 2022 Winter Olympics in Beijing next month because there will be little natural snow. The athletes say snow made by machines is not as safe as snow that falls naturally.

Observers say climate change is making natural snow less available around the world. So, people who organize ski races depend on snow-making machines. This is the case even in parts of the world that are cold during the winter months. That is because snow does not fall as often as it once did in many places. 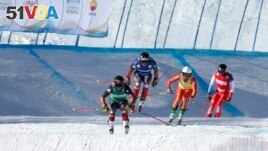 Organizers put snow machines along race courses before events to create a path for the skiers along hills and through forests.

Johanna Taliharm is an Olympic athlete from Estonia in the biathlon, an event that combines shooting and skiing. She said it hurts more if skiers fall in an area where there is no snow.

Chris Grover is the leader of the cross-country ski team for the U.S. He said the machine-made snow is "rock-hard." So, when a skier falls, it can feel like hitting a hard surface.

Gus Schumacher is an American cross-country skier. He said, at an event in France, some skiers slipped in the corners because the man-made snow did not stay together like natural snow. He called it "super-unforgiving."

John Aalberg is a former Olympic skier who now designs race courses. He said cross-country ski races now have more athletes on the course at one time. He said now the corners need to be wider to fit more skiers.

Jessie Diggins is a U.S. team member. He said the skiers can reach speeds close to 80 kilometers per hour in the downhill parts of the race. He called it "scary" to reach such high speeds when there is not much snow outside of the racing area. He said he thinks the sport is more dangerous now than in the past.

Jim Steenburgh is a professor of atmospheric sciences at the University of Utah. He said the reason races that use man-made snow are different is that snow made by machines "isn't really snow at all."

He explained that the machines force water through small holes. The water turns into droplets that freeze. However, he said, the structure of natural snow is very different.

Andrew Young is a cross-country skier from Great Britain. He crashed at an event last year and broke his leg. He was not able to recover in time to compete at the 2021 World Championships. He said climate change has changed the sport, but there are other reasons why it is more dangerous.

He said the paths the racers take were changed so that television cameras and fans can see them more easily. As a result, he said, there are shorter circles, more corners and more crashes.

Some racing areas now need less space to put on cross country events. For example, in 2002 at the Winter Olympics in Utah, there were 17 kilometers of racing paths. In future Winter Olympics, the paths will only total 11 or 12 kilometers.

Young said race courses are built with just a "ribbon of artificial snow." He added that, if there is a crash, the results "of exiting the track become actually quite serious."

What do you think will happen during the cross country ski races at next month's Olympics? Tell us in the Comments Section and visit 51VOA.COM.

skier – n. a person who takes part in a sport which uses two narrow pieces of plastic, metal or wood to slide over snow downhill or over flat areas

course – n. a path that competitors take in a race

droplet – n. a very small drop of water or liquid

ribbon – n. a narrow piece of material such as cloth

artificial –adj. not natural or made in nature; produced by people or machines