Update Required To play the media you will need to either update your browser to a recent version or update your Flash plugin.
By Dan Friedell
23 December, 2016


The year 2016 will be remembered for a long time by sports fans around the world.

The Summer Olympic Games took place in Rio de Janeiro, Brazil. Major sports leagues celebrated champion teams that had not won titles in a long time. And the world mourned the death of boxer Muhammad Ali. 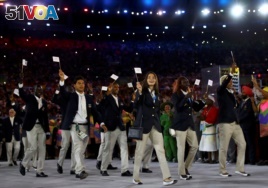 The refugee Olympic team arrives at the Opening Ceremony of the Rio Olympics.

Earlier in the year, reports coming from Rio de Janeiro said the country was behind schedule in building housing and event spaces for the Olympics. Environmental scientists said the water where some swimming and boating competitions would be held was not clean, or even safe. And athletes from some nations said they would not travel to Brazil because of worries about the Zika virus.

But, once the Olympics began, the excitement overshadowed any problems with infrastructure. American athletes, including Michael Phelps, Katie Ledecky and Simone Biles won record-breaking gold medals in the first week of the games.

Of course, athletes from around the world impressed, too. Jamaica's Usain Bolt won three gold medals for the third Olympics in a row. He won the 100 and 200-meter races and the 4x100-meter relay.

China's Fu Yuanhui became famous for her honest interviews with reporters after her swimming events.

Almaz Ayana from Ethiopia was a surprise winner in the 10-kilometer race. She set a world record in the event.

People who follow soccer, basketball and baseball will remember 2016 as the year long-time losers finally won: especially those from Leicester, England; Cleveland, Ohio; and Chicago, Illinois.

Leicester City won England's top-level soccer championship for the first time in its 132-year history. Before the season started, Leicester City was not expected to do so well. The odds of Leicester City winning the English league were 5,000-to-1. Many soccer experts thought the team would finish toward the bottom of the English Premier League standings. The big win by Leicester City previewed another historic victory, this time in the National Basketball Association. In late June, LeBron James led the Cleveland Cavaliers to their first title. It was the first major sports title for the city of Cleveland since its National Football League team, the Browns, won in 1964.

The Cavaliers defeated the Golden State Warriors in a seven-game series.

James helped seal the victory in Game 7. He blocked a shot by Andre Iguodala. The play has been watched more than 500,000 times on YouTube since June 21.

As the NBA season was coming to a close, the European soccer championship was only just beginning. And one of the biggest stories came from Iceland.

No one expected Iceland to make it far in the tournament. Its team was ranked 34th in the world.

But, in one of the biggest upsets in European soccer history, Iceland defeated England, 2-1. People around the world learned names like Sigurdsson and Sigthorsson. They enjoyed watching Iceland's players celebrate with their fans. But a week later, Iceland exited the tournament with a 5-2 loss to host nation France.

In the final game, Portugal defeated France, however, to win its first-ever major title. And the year of sports "firsts" continued.

As the seasons changed from summer to fall, Americans centered their attention on Major League Baseball. The Chicago Cubs were having one of their best seasons ever. The team had not won a World Series since 1908 and had not played in the series since 1945.

In 2016, the team made it back to the World Series. The Cubs played the Cleveland Indians in the seven-game series. The Indians had not won a title since 1948.

Cleveland won three of the first four games. The team was one game away from winning the series. But Chicago came back to win three games to clinch the World Series.

Ali was more than just a boxer. He was one of the first athletes to become a worldwide celebrity.

Ali was born Cassius Clay in Louisville, Kentucky in 1942. He started boxing as a 12-year-old and won a gold medal at the Rome Olympics in 1960. In 1964, he won his first heavyweight boxing championship.

Ali became a Muslim after the fight. He changed his name. He followed the teaching of an American group known as the Nation of Islam, but later practiced a more traditional version of the religion. He spoke out against the U.S. involvement in the Vietnam War. He was banned from boxing for three years.

Some of his most famous fights were outside of the U.S. He won memorable matches in Manila, in the Philippines, and Kinshasa, in the Democratic Republic of Congo.

In his later years, Ali suffered from Parkinson's Disease. The brain disorder affects body movements and speech. But he remained a public figure and attended many major events. He lit the cauldron at the start of the Atlanta Olympic Games in 1996, with a shaking hand.

Don King promoted many of Ali's boxing fights. He remembered Ali in this way. He "will never die. Like Martin Luther King, his spirit will live on. He stood for the world."

What do you think about year in sports? We want to know. Write to us in the Comments Section or on 51VOA.COM.

migration – n. the act of moving from one country or place to live or work in another

confrontation – n. the act of opposing or challenging another person

standings – n. a list that shows the positions of the players or teams that are competing against each other

clinch – v. to make certain the winning of something

celebrity – n. a person who is famous

neurological – n. the scientific study of the nervous system and the diseases that affect it

disorder – n. a physical or mental condition that is not normal or healthy