Update Required To play the media you will need to either update your browser to a recent version or update your Flash plugin.
By VOA
27 July, 2012

Seventeen thousand athletes and officials from more than two hundred countries will take part in the London Olympics. 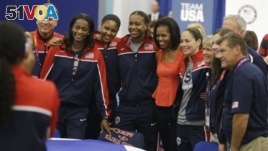 First lady Michelle Obama poses with members of Team USA, 2012 Summer Olympics, London, July 27, 2012.
MICHELLE OBAMA: "Every few years these games bring pride, excitement and wonder to millions of people around the world, and that must mean so much to all of you, being part of giving so many people that much hope."

About thirty-six thousand British troops, police and private security guards will protect the Olympic sites and the streets of London and other cities. Officials had to deploy extra troops after the private security company G4S failed to keep its promise to provide ten thousand workers.

This year marks the fortieth anniversary of the attack by Palestinian gunmen at the Munich Games. Eleven Israelis were killed. The International Olympic Committee president decided against a moment of silence at the opening ceremony in London. The victims will be remembered at a separate event.

Athletes at the London Games will compete in twenty-six sports.

Most eyes will be on American Michael Phelps when the first gold medals in swimming are awarded Saturday. He plans to swim in seven events in London. If he wins medals in three of them, he will break the all-time record for total Olympic medals. Former Soviet gymnast Larisa Latynina holds the record of eighteen.

A newcomer to the American swimming team, Missy Franklin, is also getting a lot of attention. She qualified for four individual events at only the age of seventeen.

The closing ceremony for the London Games is August twelfth.

The start of the Olympics is a high point for the sports world. But the week began on a low point for American college football in a case we first reported on last November.

On Monday the governing group for college sports punished Penn State University for its failure to stop the sexual abuse of young boys by one of its coaches. The National Collegiate Athletic Association fined the university sixty million dollars. The NCAA also cancelled all Penn State football victories for the past fourteen seasons. It banned the team from competing in postseason bowl games for the next four years. And it reduced the number of scholarships that the university can offer.

Last month, a jury found former assistant coach Jerry Sandusky guilty of abusing ten young boys, sometimes on the Pennsylvania campus. The sixty-eight-year-old Sandusky faces sentencing in September. He could spend the rest of his life in prison.

The NCAA sanctions mean former head coach Joe Paterno falls from first to fifth on the list of coaches with the most wins in major-college football. He lost his job last year over the Sandusky case and died in January at the age of eighty-five.

And that's IN THE NEWS in VOA Special English. For all the news from the London Olympics, go to voanews.com. I'm Steve Ember.