Update Required To play the media you will need to either update your browser to a recent version or update your Flash plugin.
By John Russell
28 August, 2017


On the eastern side of the Arabian Peninsula, the desert turns green as clouds cover it like a blanket.

This is the country of Oman's monsoon season.

The natural event, which lasts for three months, draws hundreds of thousands of tourists with cool weather and beautiful views. It began this year on June 21.

A 60-day festival, in Oman's Dhofar region, draws about 50,000 people every night for dance competitions, musical performances, and exorcisms.

In the midst of the clouds, people celebrate Oman's cultural diversity of Arab, African, and Asian roots. 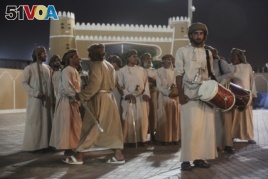 In this July 31, 2017 file photo, a group of dancers wait to perform a sword-dance during the annual summer monsoon festival in Salalah, Oman.

Officials in Dhofar region started the monsoon festival in 1998.

The monsoon festival now draws performers from 40 countries, said festival director Talal al-Masahli. He added that 60 percent of the visitors come from Oman, while the rest come from nearby countries such as Kuwait, Saudi Arabia and Bahrain.

Each night, a different Omani city takes the main stage.

The port of Sohar did a sea-themed show with cannons and a large wooden ship. The next night, a group from Bidbid chanted with swords while a musician blew into a ram's horn.

Salem Ashoor, leader of the local Ahmad al-Kabir Sufi order, said diverse groups use the festival to share their cultures. The Sufi order, for example, performed a musical exorcism in front of almost of 500 people.

These weather currents create a unique environment, which has heavy fogs and lush mountains and coasts.

Thomas Wagmann, on holiday from Dubai, noted, "Compared to Dubai, this [Dhofar region] is just fantastic because you can be outdoors all the time."

He added, "You don't even have to worry about sunburn because there's no sun."

Samuel McNeil wrote this story for AP News. John Russell adapted it for Learning English. Hai Do was the editor.

monsoon – n. a wind in the Indian Ocean and southern Asia that brings heavy rains in the summer

exorcism – n. to force (an evil spirit) to leave

cannon – n. a large gun that shoots heavy metal or stone balls and that was once a common military weapon

blow – v. to create a current of moving air by breathing

meteorologist – n. a scientist who studies the atmosphere and with weather