Omicron vs. Delta: Battle of the Variants

Update Required To play the media you will need to either update your browser to a recent version or update your Flash plugin.
By Dan Novak
13 December 2021


Scientists are examining available data to try to understand who might win the battle of the coronavirus variants.

Right now, the Delta variant is the dominant variant in the world. But after looking at data from South Africa and Britain, some scientists say the Omicron variant may soon overtake it.

"It's still early days, but ... Omicron is likely to outcompete Delta in many, if not all, places," said Dr. Jacob Lemieux. He researches coronavirus variants for a group led by Harvard Medical School. 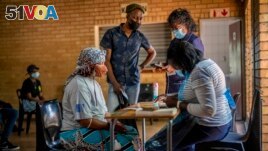 But other experts said it is too soon to know whether Omicron will spread more quickly and easily than delta.

Matthew Binnicker is a virus expert at the Mayo Clinic in Rochester, Minnesota. He said "we'll know in about two weeks" whether Omicron will overtake Delta. He noted that the U.S. is still seeing "significant surges" of the Delta variant.

Many important questions about Omicron remain unanswered. It is still unclear if the virus causes milder or more severe illness. It is also not yet known if it might escape immunity from earlier COVID-19 illnesses or vaccines.

On the issue of spread, scientists point to what is happening in South Africa, where Omicron was first found. Omicron has quickly spread there and has nearly become the dominant strain. Health experts worry the country is at the start of a new wave that may overcrowd hospitals.

In the middle of November, South Africa averaged less than 200 COVID-19 cases per day. But last week, the country saw more than 10,000 cases per day. Experts say omicron makes up more than 90 percent of the new cases in Gauteng province, the center of the new wave. The new variant is quickly spreading and becoming dominant in South Africa's eight other provinces, as well.

Willem Hanekom is director of the Africa Health Research Institute in South Africa.

"The virus is spreading extraordinarily fast," Hanekom said. "If you look at the slopes of this wave that we're in at the moment, it's a much steeper slope than the first three waves that South Africa experienced."

Scientists say it is unclear whether Omicron will act the same way in other countries as it has in South Africa. But in Britain, Lemieux said, "we're seeing what appears to be a signal of exponential increase of Omicron over Delta."

In the United States, "there's still a lot of uncertainty," he said. But "based on what we've observed in South Africa, it's likely to become the dominant strain in the coming weeks and months and will likely cause a surge in case numbers."

It is not yet known what such a surge would mean for public health.

Hanekom said early data from South Africa show that reinfection rates are much higher with Omicron than earlier variants. That would suggest the virus is escaping some immunity. It also shows the virus seems to be infecting younger people, mostly those who are unvaccinated. Early information also shows most cases in hospitals have been mild.

But experts say the situation could be different in other parts of the world or in different groups of patients.

"It'll be really interesting to see what happens when more infections potentially occur in older adults or those with underlying health conditions," Binnicker said.

As the world waits for answers, scientists suggest people do all they can to protect themselves.

The Associated Press reported this story. Dan Novak adapted it for VOA Learning English. Ashley Thompson was the editor.

dominant — adj. more important, powerful, or successful than most or all others

significant — adj. large enough to be noticed or have an effect

strain — n. a group of closely related plants or animals

steep — adj. going up or down very quickly

eligible — n. able to be chosen for something

booster shot — n. an extra amount of a vaccine that is injected with a needle into a person or animal to help protect against a disease