Update Required To play the media you will need to either update your browser to a recent version or update your Flash plugin.
By Ashley Thompson
22 April 2022


Activists held a series of climate change protests for Earth Day on Friday.

The groups' demands included an immediate halt to European imports of Russian oil and gas and an end to building infrastructure that requires fossil fuel use.

Activists in major cities across Europe gathered outside German government or embassy buildings. Germany is one of several European Union members that opposes a ban, or embargo, on Russian oil and gas imports. Leaders fear such restriction would damage their national economies. 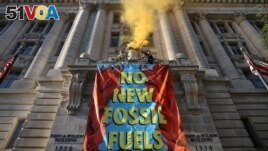 Activists from the climate group Extinction Rebellion demonstrate in front of the John Wilson District of Columbia government building to demand an end to all new fossil fuel infrastructure in Washington, U.S., April 22, 2022. (REUTERS/Evelyn Hockstein)

The demonstrators handed out Russian money that had been marked with red to represent blood. The activists say the oil and gas purchases from Russia fuel climate change and support Russia's war in Ukraine.

A small group of demonstrators gathered in the western Ukrainian city of Lviv, which was hit by Russian missiles earlier this week. Several people were killed in the strikes.

Natalia Gozak, chief of the group EcoAction, was among the activists in Lviv. She said, "When Germany continues buying gas and oil from Russia, it means that they are paying their money to construct new military machines, new bombs, which are killing Ukrainians."

In the United States, activists protested in Washington, D.C. The protesters demanded climate action on Earth Day, April 22, when people worldwide celebrate the planet and work together to improve its health.

Since Russia's invasion of Ukraine in February, the European Union has spent more than $41.2 billion on Russian fossil fuel imports.

The EU's 27 countries have agreed to ban Russian coal imports beginning in August. Countries including Italy and Germany have said they can stop depending on Russian gas within a few years.

But the 27 EU nations are divided over whether to put in place an immediate and full ban on Russian fuels. Leaders in Germany and Hungary say a full embargo would badly harm their economies. The EU gets 40 percent of its gas from Russia. The European Commission is examining the costs of replacing Russian oil with imports from other places.

Ukrainian non-governmental organizations planned to send a letter on Friday to Germany's parliament, demanding that the country stop buying Russian oil and gas.

"Germany is one of its main consumers and thus is the main sponsor of war in Ukraine," said the letter, seen by Reuters reporters. "You only need some political will and humaneness to impose a full embargo on Russian oil and gas," it added.

hand out –v. (phrasal) to give something to many people

emission — n. (often pl.) something that is sent out, given off or released

consumer –n. a person, group or country that buys goods or services

sponsor –n. a person or organization that pays the cost of an activity or event