Update Required To play the media you will need to either update your browser to a recent version or update your Flash plugin.
By Hai Do
03 June 2022


A 14-year-old student from San Antonio, Texas, has won the Scripps National Spelling Bee on her fourth attempt.

Harini Logan's victory came late Thursday in the first-ever spell-off tiebreaker of the competition. Logan spelled 21 words correctly during the 90-second spell-off. That was six more than her opponent, 12-year-old Vikram Raju of Aurora, Colorado.

The judges said the winning word was "moorhen," which means a female, red grouse bird. 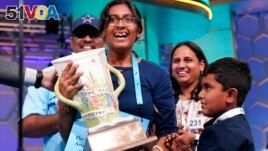 Logan's victory came after it appeared that she had answered a question incorrectly during the vocabulary round of the spelling bee. But she was soon reinstated.

She defined the word "pullulation" as the nesting of mating birds. But the judges said the correct answer was the swarming of bees.

"My heart stopped for a second," Harini said.

A few minutes later, head judge Mary Brooks said the judges studied the word and her answer. They decided to change their decision: "The answer you gave to that word is considered correct, so we are going to reinstate you."

Grace Walters has trained Logan in spelling for some time. She said, "Harini has been to hell and back with her spelling bee experiences,"

Harini said she was afraid when the spell-off was introduced last year, saying, "I go slow. That's my thing. I didn't know how I would fare in that setting."

Over the past few months, Harini prepared for the possibility of a spell-off. And on Thursday, Harini won the $50,000 in prizes. She is the first-ever spelling bee champion to have been reinstated during the competition.

The Scripps National Spelling Bee takes place in Washington, D.C.. It has been held since 1925.

Vikram Raju came in second. He said: "I just had to be a little faster." He hopes to return next year.

The spelling bee returned to in-person competition this year after being held mostly online last year.

"In the end, it's all been worth it," Walters said. "This is the ending Harini deserves."

Ben Nuckols reported this story for the Associated Press. Hai Do adapted it for VOA Learning English.

tiebreaker — n. an extra period of play or an extra question that is used to decide the winner in a game when the score is tied or even

reinstate –v. to put someone back into the position or job that they had before

fare –v. to do something well or badly (often used in questions)

prepare –v. to make yourself ready for something that you will be doing On Fourth Try, 14-year-old Wins National Spelling Bee